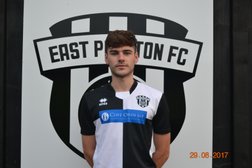 Costly mistakes on at least four of the Pagham goals resulted in EP going out of the Peter Bentley Cup.

Manager Bob Paine made five changes to the side that won in the FA Vase the previous Saturday as he rotated his squad to give players much needed game time.

The game was gone after being 1-4 down at the break. This despite taking the lead after just two minutes through a great Dave Beaney (pictured) header from a Ryan Quirke corner.

The second half was a much better performance and goals from Dan Huet and Jack Barnes meant the second 45 mins were drawn but the game was lost in the first half.

Huet side footed home after a great ball from Barnes set Lucas Pattenden free and his pace got him goal side of the defender and he squared to Huet for EP's second goal. EP's third goal came from a run from Quirke into the box where he was fouled resulted in a penalty which Barnes smashed into the top corner.