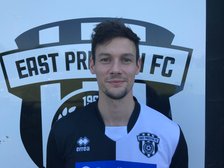 EP lose in the quarter final to Haywards Heath 1-3

EP's great run in the Sussex Senior Cup came to an end at the quarter final stage when they were beaten by Haywards Heath at the Hanbury Stadium 1-3.

HH took the lead on 7 mins when Laing was allowed too much time and space and his shot found its way past George Bentley in the EP goal. The away side grew into the match after this disappointing start and got their just rewards on 31 mins when a great move saw Luke Brodie sweep the ball from the left into the path of Lucas Pattenden on the right and his cross found Asa Nicholson (pictured) to slot home from six yards.

HH were awarded a soft penalty on 59 mins when the referee judged Matt Searle to have handled the ball. Bentley saved the resulting spot kick to keep the score 1-1. Two minutes later HH were ahead when a deep cross found Simpson at the far post and his header across goal was headed in by Spinks. HH increased their lead on 66 mins when EP switched off from a free kick allowing time and space for a cross that was cleared poorly and Louis hit a shot from 20 yards that found its way into the net.