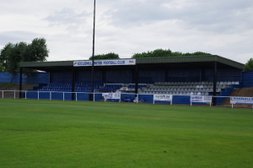 There is evidence of an Eccleshill United football club in existence pre 1910 and they played at Eccleshill Recreation Ground. This was a youth team with a maximum age of 20 years.

The present Eccleshill United did have a team before the Second World War, but it had to be disbanded when most of the players and officials joined the armed forces.

The club was reformed in 1948 and during the 1950's played in the Bradford Red Traingle League, during this time, a move was made from the Recreation Ground to a pitch on Acre Fields. Then in 1963, the club purchased land at Plumpton Park, which remains its current headquarters. A great deal of work had to be done to transform the old quarry into 2 separate football pitches.

The clubs senior side joined the West Riding County Amateur League, progressing to the premier division in 1972, and in 1974 a licensed clubhouse was built. The club applies to join the North East Counties League in 1982, a big which proved unsuccessful. New terracing was built and the dressing rooms upgraded and at the end of the 1984/85 season a successful application was made.

Since that time the club has operated in the NCEL with varying degrees of success. During the middle of the 2000's the club fell on hard times, and in 2008 the first team were relegated to the first division, narrowly avoiding finishing in the bottom two and being forced to leave the league the season after.

A new committee was formed under the leadership of Adrian Benson and the committee resolved to take the club forward and a relationship was formed with RIASA (Richmond Development Academic and Soccer Academy) which allowed Eccleshill access to many foreign, mainly American players.

Several high profile managers were appointed over the next few years including;Ian Banks, Bobby Davidson and Lee Duxbury. This culminated in Eccleshill's most successful season 2013/14 seeing them narrowly missing out on promotion, but winning the West Riding County Cup final and loosing on penalties in the NCEL League Cup final. Both these finals were held at Bradford City's Valley Parade ground.

At the end of the 2014/15 season, Eccleshill ended it's association with RIASA and decided to embark on a more traditional pathway with mostly local based players. The squad that has been assembled by new manager Mark Greaves has shown great promise in the pre-season friendlies and we hope for a successful season.