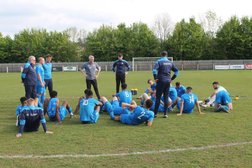 Heartbreak at the end of a long hard season

Match Report from Charlie Bradford of the non league chronicles.

To many an inter step playoff (that’s a relegation playoff to you and me) would be more akin to say the Bundesliga. However, for this season at least, the same situation was on offer for steps 4 and 5 of the Non-League pyramid, with the teams finishing third from bottom in step 4 hosting a side who finished as runners up in step 5, with the winner taking their place in step 4 next season as part of a FA restructure.

Given this very rare (if not surely a one off) occurrence was taking place, I had to go to one of them, with my choice being Kempston Rovers (who finished third from bottom in the Southern League Division One Central in step 4) taking on Eccleshill United (who finished as runners up in the Northern Counties East League Premier Division in step 5), as it was a new ground and two new teams and a simple journey from Bedford station. What however I thought was unfair was having the game over one leg instead of two, particularly at the higher step 4 club and particularly given the travel factor from Yorkshire to Bedfordshire.

On a warm sunny afternoon in a pleasant ground, Eccleshill had Kempston under the cosh early on with a pass into feet flicked off in the box to Sumaili Cissa who forced a smart save out of Kempston goalkeeper Joe Ringer in tipping the ball over the bar.

Kempston then began to stamp their authority in the match and conjured up some decent opportunities when Trey Charles shot at Eccleshill goalkeeper Edward Wilczinski from 20 yards before the Eccleshill custodian was forced into making a smarter stop with his legs to deny Sam Johnson.

Kempston eventually took the lead in the 37th minute when a cross from the right by Ben Baker struck an arm, giving the referee little option but to award a spot kick. Charlie Hayford stepped up and saw his effort saved but he was in hand to tap home the rebound.

Eccleshill came out firing in the second half and after Cissa flashed two shots wide of the right post, they equalised in the 50th minute when a beautiful curling shot from the edge of the box by Sam Bradley found its way into the top right corner.

In the ascendancy, Eccleshill took the lead six minutes later when a shot from just outside the area by Cissa hit the inside of the left hand post and rolled its way in the back of the net.

Eccleshill then had some glorious chances to add to their lead when firstly Zac Sangster forced Joe Ringer into a near post stop before a 25 yard free kick by Talent Ndlovu clipped the top of the bar.

Typically Eccleshill were made to pay for not taking their chances when Kempston equalised in the 68th minute when somehow a shot from the right side of the box by Ben Baker hit the left post and found its way in.

The game then began to ebb and flow and became end to end and perhaps the best chance of a winner in regulation time came right at the death when a square ball across the face of the box by Kempston’s Taylor Bakogeorge was struck wide by Trey Charles.

Extra time began and the game did not let up with Eccleshill conjuring up two good chances in the first period when Sam Bradley headed a corner down towards goal only to see Ringer come up with a big paw to claw the ball over the bar before a curling shot from the edge of the box by Talent Ndlovu was tipped around the post.

Kempston missed their third penalty when they hit the bar but Joe Ringer made amends by saving Eccleshill’s fourth and sixth penalties to mean both sides will remain in the same step next season.

MOTM: Sumaili Cissa (Eccleshill United) - got himself a goal and looked a nuisance up top.