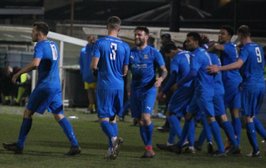 Eccleshill Make It 4 wins In A Row

Eccleshill move 3pts clear of 3rd in the league

On the final home game of the season the visitors where local rivals Silsden AFC.

With everything to play for, for the home side, it was a good start and Eccleshill should have been 1-0 within the first couple of minutes but a chance was wasted by Jonny Irving.
Silsden then scored on there first and only real effort of the game. A mistake from keeper Edward Wilczinski let in Josimar Bradshaw to put the ball into the back of the net in the 7th minute.

After Silsden scored it was all Eccleshill, corner after corner but no really effort on goal. Shouts for a penalty as Jonny Irving was trip in the area however the ref waved play on. Then a big chance fell to Luke Aldrich in the area one on one with the keeper but he somehow blasted the ball over.
Then another chance just before half time, cross into the box from Kelvin Bleau, Jonny Irving brings the ball down and smashes against the crossbar the rebound comes back to Luke Aldrich who’s shot is well saved by Silsden’s Keeper.

The second half gets under way and it carry’s on like the first half has finished with Eccleshill pushing for an equaliser.
Again the ref turns down a penalty shout after Talent Ndlovu is knocked to the ground.
Finally Eccleshill get a break through after some good pressing from Jonny Irving to get the ball a slide it past the keep to make it 1-1.
Eccleshill continued to put Silsden under pressure and this paid off in the 70th free kick crossed into the box the defender heads the ball clear however it’s then headed back into the box when it falls to Sam Bradley who chips it into the corner over the keeper to make it 2-1.
Like Aldrich rounded the night of in style in the 80th minute, the ball was played up field by Sam Bradley to Luke who bought the bought the ball down in the area with his foot turned and put it nicely past the keeper to make it 3-1.

Eccleshill are now unbeaten in their last 4 games and are playing some really nice football at the right time. With two games to go it’s in their hands to now finish second and clinch the playoff place.