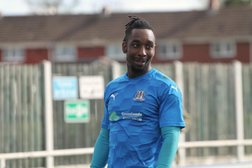 Eccleshill needed a win to secure a playoff spot and 2nd place in the league.
Eccleshill started off the game well and were 1-0 up in the first 10 minutes when Luke Aldrich squared the ball to Sumaili Cissa to put the ball into an empty net.
The second one came just before half time after a great display from Athersley keeper, it took Luke Aldrich to hit a long range shot from outside the box to put Eccleshill 2-0 up for halftime.
Eccleshill started the second half as they finished the first, on the attack and took 2 minutes into the half for Luke Aldrich to put Eccleshill 3-0 up.
The 4th was a great volley from Sumaili Cissa just inside the area to put Eccleshill 4-0.
He completed his hat-trick in the 80th minute when he hit a shot hard at the keeper who couldn’t keep it out to put Eccleshill 5-0 up.
The 6th came in the 83rd minute from the penalty spot, when Kelvin Bleau stepped up to score his first goal of the season and make sure that all out field players had scored a goal this season.
Eccleshill winning the game 6-0 to finish the season in 2nd place.
Great finish to the season with Eccleshill securing 2nd spot and a playoff place.
Now Eccleshill just need to wait to find out who they play in the playoff final to hopefully secure promotion on the 30th April.
Share via
FacebookTwitter
https://www.pitchero.com/clubs
Recent news