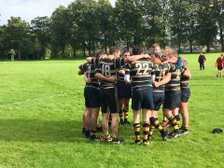 ENRFC lineup with a mixture of new faces and club stalwarts to take on the "Pride of the Clyde" Bishopton RFC.

Edinburgh Northern welcome Bishopton RFC to Inverleith Park for the opening fixture of the 2018/19 season this Saturday, as new head coach Chris McKenzie, new captain Dominic Harrison, and the rest of the squad look to kick off the season with a win, after their positive pre-season preparations.

For those not aware, the 2018/19 season has seen yet another reshuffle by the Scottish Rugby Union. The conclusion of which, has seen Edinburgh Northern return to the resurrected East Three for the upcoming campaign, alongside neighbours Inverleith, Lismore, and others with a lower finish in last year’s East two table.

For many who played a part in the promotion seven years ago, and for those who secured our league status (including flirting with promotion in the 15/16 season) in the years that followed, this news came as a disappointment. However, this season represents an excellent opportunity; a good level of opposition in a competitive division, with the potential challenge of a league title, and to perhaps see the club in a cup (Bowl) after Christmas, if they secure some positive results.

The road to that success begins tomorrow, with the opening fixture against our new friends from the West Coast. Bishopston will be unfamiliar to almost every Northerner, and are the first West Coast side to visit the Bunker since Cumnock six years ago.

Last season represented a tremendous success for the Renfrewshire-based club as they took second place in a tough West Three, which included long away trips to Fort William (Lochaber RFC), Stranraer (Wigtownshire RFC), and the Isle of Mull (Mull RFC), where they sealed promotion on the last day of the season.

That promotion campaign was built around their 9/10 axis, and a prolific, dangerous pack. Scrum-half Ruari Taylor scored an impressive 19 tries last season, whilst fly-half Max Catto score 174 points, including 5 tries. Hooker Ryan Moore (13), openside flanker Kyle Haldane (10), and No.8 Scott Baird (7) contributed 30 tries between them, suggesting Northerners could be in for some strong driving line-outs and an ability to convert from fringe play.

This contributes to a stern test for the pride of Stockbridge, but a relatively familiar Northern side take the field to meet that challenge, having a great deal of experience both in the starting 15, and coming off the bench.

In the front-row, Dougie Candlish starts at tight head, following a good pre-season. Alongside him are regular hooker Andrew Suttle and loose head Tom Horton; a power-heavy trio representing a combination seen for the first time in Northern colours on British soil.

In the second row, Alan Burns returns to the 1st XV partnering new vice-captain Jamie McCann at lock. Both featured intermittently last season, due to injury and parenthood, and it will be enjoyable to see how they combine in the boiler room.

In the back-row, captain Dominic Harrison starts in his traditional birth of openside, and is joined by No.8 and resident South African Jeremy Dobrowsky. Completing the trio at blindside is Jason Thompson, who makes his first start for Northern in almost a year and half.

In the backs, it’s a new look half-back pairing, with Max Hoani starting at scrum-half and new recruit Aaron Laurenson, formerly of Broughton HSFP starting at fly-half. The centre partnership is more familiar, with new vice-captain Robbie Brown continuing in the 12 jersey where he had so much success last season, and he is joined at 13 by Jamie Thompson.

In the back three, Jake Letham returns at 15 following his sabbatical, and is joined by the familiar face of Andrew Crawford Leslie on one flank and new recruit John McIntyre on the other.

On the bench, there are many familiar faces, including the welcome return of former captain/coach John Leatham. Joining him to cover the front row are birthday boy Jamie Kindness, monolith Kristian Anderson, new recruit Aaron Gibbs, and the timeless Kit Walker. Making up cover for the back five are last year’s captain Calum Harper, young Thomas Bruch, new recruit Will French, and returning Rory Pounds. Last but not least, cover for the backs is made up of Aidan Gallagher, Daniel Johnston, and Luke Worthington.