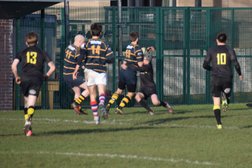 Northern snatch victory at the death over local rivals!

Edinburgh Northern made it two wins from two this season, beating Trinity Academicals 15-12 in the first league fixture at Inverleith Park this season.

Two late tries from scrum-half Barry O’Dea and winger Michael Mawdsley, along with a penalty and a conversion from Andrew Spiller saw a battling Northern side come from behind to secure victory over their close geographical rivals.

The game opened in blazing sunshine with a youthful Trinity side looking to spread the ball wide at almost every opportunity in the dry conditions. They are one of the better teams in the division when it comes to expansive rugby and they demonstrated this to the full almost immediately from the kick-off.

For the opening ten minutes, Northern struggled to gain any possession of merit. Trinity for all their wide ambition kept the ball well, whilst struggling to actually break through the Northern defensive line. A composed missed pass by the Trinity hooker saw their winger clear, but good covering defence from Edinburgh Northern held them off.

When Northern did get the ball, it was with some menace. A nice flowing hands move in open play saw captain Paul Holland break through up the right touchline and Stanley Lister on the inside pass was unfortunate to be stopped short of the 22 with a knock-on. Trinity cleared their lines well from the resulting scrum, but Andrew Spiller arching kick and good chase by Jake Letham saw the full-backs clearance kick charged down and Kit Walker held up over the line.

Northern weren’t to be denied on their first significant venture into the Trinity half. A penalty taken quickly by Barry O’Dea saw Northern get to again within inches of the line, to be turned over and the ball cleared. Another penalty saw Northern go to the corner and full-back Colin Bryans broke through off the resulting line-out, only to be brought down five metres short. The resulting scrum saw Trinity clear there lines but a good counter-attack saw Northern awarded a penalty which Andrew Spiller dutifully kick-over. 3-0.

Northern had dominated for around 15 minutes at this stage and although Trinity looked a threat, a lot of their rugby involved them traipsing from side to side of the pitch, all despite several good runs from their No. 8. With the momentum swinging back towards the Newhaven side, the Trinity fly-half opted to grubber in behind a staggered Northern defence, collected it himself and despite a good cover tackle from Michael Mawdsley, the fly-half’s offload went to hand and Trinity scored under the posts. 3-7.

Northern were not to be outdone in the first half and should’ve gone in ahead at the break. A lovely flowing backs move saw Hugh Vermont release Andrew Crawford Leslie, who sped past one defender before being bundled into touch inches short, with Trinity clearing the ball and ending the half off the subsequent line-out.

The second-half opened in much the same form. Another good backs move saw Robbie Brown punch a hole in the Trinity defence from 12, before the ball made its way to the left-hand touchline, where again Andrew Crawford Leslie beat two defenders to only see himself adjudged as being held-up over the line.

It was the opening to a second-half filled with endeavour by Edinburgh Northern, and one in which there occasional complacency threatened to see them derailed. Shortly after nearly scoring, Northern saw themselves turned over and the ball moved by Trinity at a frantic pace to their hooker who grubbered clear, the ball being retrieved and worked through the hands back inside till they scored just wide of the uprights. The kick was missed. 3-12.

Despite this set-back, Northern responded well. When a loose clearance by Trinity fell to Colin Bryans, the full-back dispatched Crawford Leslie once more, who burst through the defensive line only to be hauled into touch at the last second, prompting frustration from both the winger and home support. It was to be a day of great endeavour but little fruition on his acts and hopefully he’ll be in amongst the try scorers in the coming weeks.

Northern weren’t disheartened and the scrum continued to dominate Trinity till two late replacements saw the balance redressed slightly. Jamie McCann dominated from No.8 and it’s a credit to the work ethic back-row of Lister and Furlow that Northern were able to dominate the game when in possession.

Searching for a way back into the game, Northern punched a hole through the middle of the Trinity defence, with a nice offload seeing Jake Letham make 20 metres, before they recycled the ball once more. The first attempt by Andrew Spiller to nip in round the fringe was held up short, but two phases later, Barry O’Dea did much the same and touched down under the posts. Andrew Spiller converted. 10-12.

With Northerns heads up, Trinity have once last chance to score. A good break from the number 20 through the centres was stopped short by fantastic cover defence by a nameless but brave forward, and the subsequent turnover saw Northern awarded a penalty.

With enough time on the clock Northern kicked long into the corner through Andrew Spiller and executed another perfect driving maul which trundled them deep into the Trinity half. A period of five or six or so phases followed, when finally Andrew Spiller nipped through a gap in open play, carrying to within ten metres of the posts.

Barry O’Dea who had marshalled his pack masterfully all day, took control and set up two neat carries round the fringes. With the Trinity defence scrambling and camped on their own line, Barry O’Dea played in Michael Mawdsley who crashed through a gap to score in the far left corner, prompting a delirious response from the assembled Northern cohort on the touchline and pitch. Andrew Spiller narrowly missed the conversion, but the points went to the Edinburgh Northern.

A composed performance by Northern and all round excellent forwards display through-out. Whilst Trinity played some fantastic rugby, Northern were able to grind them down with a near-total dominance in the forwards for large swathes of the game. Tremendous patience for the last try also showed that Northern are a different side under pressure than last year.

Onwards to next week and a very different challenge of Inverleith.