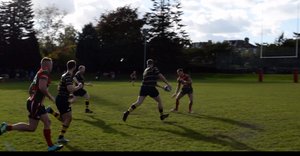 Edinburgh Northern cemented their title credentials as a full squad combined to deliver a brilliant five-try performance, stealing the top spot in East 3 in delicious fashion from our hosts Dalkeith following a 33-17 bonus-point victory.

Northern kicked off heading down the slope at Kings Park on a unseasonal day in Midlothian, with pretty much constant sunlight broken only by the odd spitting shower. The opening five minutes showed a Northern side with intent in defence, and they quickly forced a turnover from a knock-on with a good press.

Keeping the ball with some good carries through Tom Horton and Rory Pounds, Northern marched themselves into the Dalkeith 22, and soon good a reward for their early endeavour. The ball made its way along the line to winger Andrew Crawford Leslie, and he duly rolled back to years to accelerate through the space and in under the posts for the opening score, fly-half Andrew Spiller duly converting.

The game resumed and Dalkeith set about a seemingly thankless task once more, where despite their best intentions to move the ball from side to side, they found themselves struggling to make any kind of break through a mass of Northern bodies. The particular highlight of this period was that when the ball did successfully make its way into the hands of an outside back, they found themselves pressured at every turn by Jake Letham rushing at outside centre and good defensive covering by Doug Younger and Andrew Crawford Leslie.

This defence would soon have its reward as Northern won a penalty from a turnover at the breakdown. Northern kicked to the 10, and the juggernaut that is the Northern line-out drive ploughed deep into the 22. Some lovely handling by the backs saw the ball move into the centre. A quick switch saw Andrew Spiller find the onrushing Wilson Craig from 15 who touched down under the posts. Again, Spiller converted.

Again, Dalkeith tried to find a way back into the game, with only some big tackles by Jason Thompson, Rory Pounds and Paul Holland preventing the hosts from breaking through close to the ruck. Northern eventually got the ball back, and managed to play some lovely sets of phases (12 at one count) for a sustained period. You could see that in the contact situation Northern were pretty dominant going forward, and none more so than Sam Shelley and Kit Walker who made decent yards with seemingly every carry.

Northern would eventually get their reward for this good play, although Crawford Leslie finding himself himself racing into the corner off a loose kick from Dalkeith, with the over the head/no look offload just failing to reach the mark of any support runner was a particular highlight.
He wasn’t to be denied though.

Off some good phase play, Spiller orchestrated a loop move, with Aaron Laureson firing the ball out the back door to the oncoming Paul Holland, who with a deft little pop sent Crawford Leslie in for his second try of the game, and the lanky second rows second assist of the year. Spiller was unlucky to not convert from the touchline.

Half-time came shortly afterwards, and there was much to be pleased about for the travelling support, after a pretty one-sided first-half display.

Dalkeith restarted the game, and looked to be pressing Northern early on in the proceedings. One facet of Dalkeith style is they are extremely confident with the ball in hand, and they got their reward for some good work soon after the break, slipping through one of their players to touch down under the posts. The real highlight of this was that their kick was charged down by an rushing mass of old gold and navy, and Northern kicked on from here.

A change at half-time had seen Sacha Ponniah make it onto the field for his first appearance of the season. In the face of good defence deep in the Dalkeith half by Northern, a poor exit by Dalkeith fell to the centre, and he scythed his way through through their loose defence to take Northern into the Dalkeith 10. The ball found its way to Kristian Anderson, the behemoth prop somehow finding himself in a wide channel, and the big man punched through at great speed. Showing fabulous hands from a front row, he drew the 15, before offloading daintily to Doug Younger, who raced over in the corner to touch down. Andrew Spiller again was unlucky to miss from the touchline, dropping just short.

The second-half continued in much the same manner as the first, and Dalkeith played with direction for most of the third quarter. When they were turned over, which happened regularly, Northern took full advantage and put together some wonderful bursts of play, including one excellent 40 metre break that was unlucky not to end in a try.

You had the sense that the visitors could smell blood, and they soon got their fifth try of the day, and what a beauty it was. A driving line-out (that old chestnut) took them into the 22 and was brought down short, giving Northern advantage. The ball worked its way eventually to Andrew Spiller, and the petit general dispatched a wonderful chip over the defence, which Sacha Ponniah gathered under the posts to touch down. This was duly converted by the fly half, who was having his finest game of the season.

The last ten minutes saw Dalkeith come out and play, and they deserved their two tries late on, both being fairly middle-distance efforts that the highlights will detail. Northern regrouped, and some good hits in the closing minutes saw a bit of esprit de corps restored to a tiring Northern, with Alan Burns putting in one final hit to send a Dalkeith player into touch and end the game.

Analysis
These late efforts did add some polish to the score line for the hosts and the score-line is perhaps an unfair reflection on the visitors, as it certainly didn’t feel like a 16 point win. Dalkeith look like a very good side when things fire, and that should serve as a warning for the return fixture.

However, the reason for the margin of victory was that in the first 60 minutes of this game Northern didn’t let them fire, and this performance was by far Northerns best this season. Dalkeith looked beaten on 55 minutes Northern when Northern scored their fifth try. It takes the visitors to first in the table, and extends their winning run against the Midlothian side to five matches on the trot – a double reward for such fine work.

Lismore at home this weekend beckons, and with Dalkeith travelling to bottom side Walkerburn, five points are a must to hold onto top spot in the division.