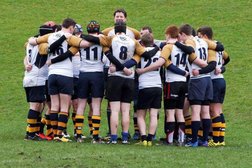 The 2XV were at home to Forrester RFC 2XV in a fixture reversal last weekend. The sky was blue, the wind was light and the boys were still fired up seeking that elusive win.

From the first kick off, it was evident that this was going to be a high tempo game as Northern looked to tire the larger pack of Forrester. Northern patiently built up to 10m out from the Forrester line and the penalty was awarded. Having spent 10 minutes camped in the Forrester 22, skipper Miller chose to take the points and get the board rolling. A successful kicked followed.

Forrester quickly responded with a try through some soft defending on our part allowing their scrum half (who could easily have played 1 or 3 given his frame) to burst free and dot down under the sticks.

The game then swung from side to side and Northern pounced back. Some great hands and basic rugby really brought out the best in Northern. Patient build ups and ensuring the ball was taken to deck with the work being done to present ensured we kept our possession and made the most of our chances.

Skipper Miller even managed the rare feat of crossing the line after a cracking ripped ball in a tackle and a solid 40m “sprint” as he calls it. Kerr Donaldson also scored his first try for the club after a brilliant series of offloads from 9 to 13 to 14 out the line to maximise the overlap.

Northern really benefitted from their kicker, Stewart Morrison returning after long term injury. Stew had a great control of the game with his kicking and ensured he kicked our points when on offer.

Just before the half time whistle, Northern stalwart Muff went down after a messy scrum collapsed around him. Unfortunately we lost our rock in the scrum and had to revert to uncontested scrums. This caused lengthy debate between both skippers and the referee as to whether subs could indeed be used or not. We continued the game using our bench and agreed to discuss it after the match.

Northern won on the day, 80 minutes of the best rugby skipper Miller has seen at the club and a rightful win 29-26 to Northern.