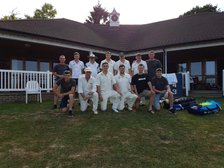 At the end of this year’s season, the club managed to stay in Hunts County Division 1 but it was close. As expected the promotion to Div 1 was challenging, however everyone one stuck to the task and with some explosive batting from Sam Chapman the side managed to give talented opposition a good game and won 4 matches. Chapman ended the season having scored 1134 runs in all games, a club record including 1 double century and winning this year’s batting award. We wish him the best of luck playing cricket in New Zealand.

The bowling trophies were shared by Tom Whymark (best average) and James Thorogood (most wickets). Thorogood who is more normally thought of as the club’s hard-hitting number 3 bat obviously decided it was time to be the clubs new allrounder and it worked well. The bowling strength this year was greater in depth and we hope this continues in 2019. The fielding trophy went once again to Harry Young. He always sets the standard in what is a talented fielding side.

For parts of the season Archie van den Berg looked like he might be leading wicket taker and he was voted Young Player of the Year at the club end of season dinner. This was held at what has become Boxford’s favourite pub, the Fox and Hounds ………in Groton. Many thanks to Steve and the team for another great night.

The club also entered the mid week Suffolk Cup T20 competition which was a welcome new challenge for the players and we once again ran the Edwardstone Juniors training sessions on Saturday mornings which will continue next year.

As always thanks must go to all those who played for the team, coached the juniors, made the pitches, ran the 200 club, booked the fixtures, chaired the meetings, did the scoring, produced accounts, captained the various teams, made the teas etc etc etc. Looking forward to the new season.

Finally, Jack Clark has for many years been our captain, during what has been a successful time in the club’s history. He has been instrumental in maintaining our competitive edge while playing the game, as well as keeping a friendly atmosphere within the playing group. Jack has decided to step down as skipper and we would like to thank him for the great amount of work he has put into to the club over the years and look forward to seeing him playing for the team next year. At the AGM, Rob Whymark was voted in as the new captain and we wish him and the team the best of luck next season.

For further information on the club go to www.edwardstonecricketclub.com