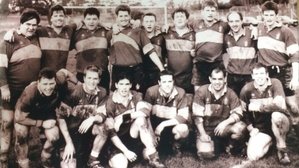 1998/1999
Four wins was enough to see us finish fifth in the table, equal on points with Lightwater who placed higher having scored more tries.

All these wins came at home, the first of which was on the opening day of the season over Old Suttonians. The second saw the University of Surrey defeated 23-15, followed by a close encounter with Old Freemans which ended 10-8. Bragging rights over local rivals Lightwater were achieved in the final game with a 16-13 victory.

Despite winning six of our ten games, we finished level on points with both London Cornish and Old Bevonians, and an inferior points difference meant we were placed sixth.

Highlights included an opening day 31-10 home victory over Old Bevonians, and a second successive victory over the University of Surrey, winning 22-5 away.

A low point was the 28-0 away defeat to Lightwater, who avenged their defeat from the previous season. 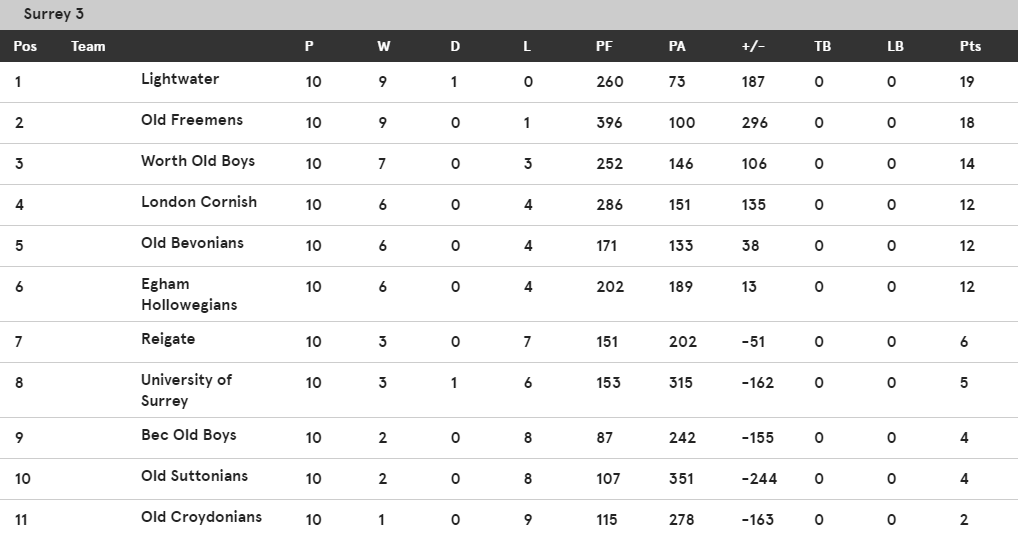 With the league reduced to nine teams, six victories from eight gave us a 75% win rate, with a shock 25-5 defeat to Old Croydonians early on in the season costing us what would have been a promotion-securing second place finish.

Highlights included a 57-5 thrashing of Old Suttonians, and an 18-16 victory over Haslemere in the final round of fixtures to secure the third place finish.

This remains the Club's highest league placing in the last two decades.

Unfortunately we failed to build on the success of the previous season, slipping to sixth having won four from eight. Points difference once again came to haunt us, with a 41-0 victory over Worth Old Boys overshadowed by a 73-3 away defeat to London Cornish.

On the plus side, we avenged the defeat to Old Croydonians from the previous season with a 20-6 home victory, and notched up a 53-12 away win over Old Suttonians.

A tricky start to the season as we lost the opening three fixtures to Wandsworthians, Chipstead and Worth Old Boys. Victories over Old Croydonians (21-8) and Old Bevonians (54-7) provided some solace, but a narrow 5-3 loss to Old Suttonians was disappointing.

With Surrey 3 reduced to five teams, whilst the league above featured 15 sides, this season saw teams play each other both home and away for the first time.

Alas it was one to forget, as three wins from eight saw us finish fourth with six points.

The number of teams in the league was increased to 8.

Unfortunately a series of narrow losses to Haslemere, Woking and Economicals prevented us finishing any higher than seventh.

After a two-year experiment in Surrey 3, a new structure was created which saw all the teams in the regional divisions play each other twice. We were placed in a new-look Surrey 4, alongside sides such as London Media, Teddington II and Pelhamians.

We notched up eight victories plus a rare draw to Woking to finish a respectable sixth place.

Highlights included victories over Merton (36-3) and Old Suttonians (50-0), but we largely struggled away from home, beating only Haslemere (6-0) and Old Oundelians (12-0) on our travels.

The league was dropped from ten down to nine teams, and we won six of our sixteen games, as did three other sides in the division.

Things didn't start well with an opening day 62-5 thumping courtesy of Merton away, followed by a 27-13 loss at home to Woking. Things improved with victories over Haslemere (30-12) and the London Fire Brigade (24-5), but a 23-12 loss to Economicals on the final day of the season prevented us from finishing any higher than seventh, separated on points difference from sixth by less than a single score.