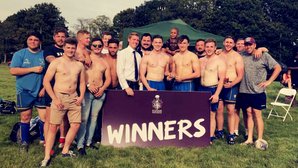 With the pitches freshly cut courtesy of a newly acquired sit-on lawn mower, and the lines looking sharp thanks to specialist assistance from Hugh Blackburn of Roadgrip, competitive rugby returned to King's Lane after the summer hiatus.

The opening match was a tight affairs, played at a somewhat frantic pace, as Chipstead and Thamesians locked horns in a repeat of last year's final. On this occasion, the two could not be separated, with both teams scoring 5 points a piece.

Next up saw Egham Hollowegians take on Twickenham II. Though on paper the level difference should have seen the latter win easily, the Egham Hollowegians defence, that we have worked on so hard over the summer, kept out wave after wave of attack in the early stages. However, we struggled to get ourselves on the front foot, and when we had ball in hand, our attack looked a little flat, limiting our ability to create any real chances. With the game nearing the end, a 0-0 draw looked the most likely outcome, but we were caught off guard when the referee awarded a penalty inside our half, and a quick tap, with the majority of our team still tracking pack from offside positions, gifted Twickenham II a 7-0 win.

Fellow Surrey 4 side, Woking, had the unenviable task of playing Chipstead in their first game of the afternoon. Our locals rivals looked a little sluggish in comparison to their better conditioned opponents, and weren't helped when one of their men was forced off having smashed his face in a tackle. Though not quite a rout, tries either half saw Chipstead walk away 14-0 winners.

The game that everyone had been looking forward to took place shortly after, with Twickenham II and Thamesians squaring off. Given the proximity of their home grounds, and with many of the two teams on first name terms, there were plenty of personal battles on the pitch, and despite the big hits, the game was generally played in good spirits. It was another close encounter, but Thamesians gainedthe upper hand with a late try, running out 5-0 victors.

The last game of the opening round saw Egham Hollowegians take on Woking. This was the one game we'd been targetting a win in, and we could not have got off to a better start when Charlie Depel was given the opportunity to stretch his legs and outplace their back three. Hereon in the floodgates opened, with Ash Dixon and Matt Scaysbrook both dotting down before the half was up. At the start of the second, Wik Botha ran clear, only for the referee to chalk it off for a forward pass in the buildup. However, he soon enacted revenge, as he was able to expose a gap and leave two tacklers for dead as he sprinted 30 metres to the line. With another Woking man going down injured, Charlie Depel grabbed his second, before Mark Molinaro crossed the line late on. The final score was a well deserved 40-0. Our league match in December will undoubtedly prove a much sterner test!

Chipstead versus Twickenham II was every bit as close as anticipated, with the first half remaining scoreless. Midway through the second, Chipstead took the lead. However, they failed to add the conversion, meaning a Twickenham score under the posts would probably be enough to secure them the win. A late try in the corner put them in the driving seat, but the kick from out wide proved too tricky for their fly half, resulting in a 5-5 draw at the whistle.

Thamesians therefore would be named champions with a win over Egham Hollowegians, and having brought a giant squad and enjoyed a longer rest, came in the freshers of the two sides. With the first half nearly up, the referee awarded Thamesians a penalty close to the Egham Hollowegians line. With a heft set of forwards, they opted for a scrum, and despite holding off the push, they were able to make the most of the additional space and go over for the opening try. In the half time break, Wik Botha, playing his final game for the Club, gave a rousing speech, as we looked to raise the intensity. Needless to say, we came out fighting, and having learned our lessons from earlier in the day, the backs started to create chances as they added depth to their play. This paid dividends, as the mercurial Olly Fox showed what his devastating pace can do, opening up the Thamesians defence and levelling the scores. This very much gave us the upper hand, and we started to win the territorial battle. A lineout inside their 22 gave us the perfect platform to set up an attacking maul, and desperation set in as Thamesians illegally brought it to ground. With time on the clock at a premium, Dave Kelly knocked over the kick, giving us a 10-7 lead. Having dropped the ball of the restart, we were immediately put back under pressure, but we somehow disrupted the resulting scrum, and with the ball going dead, victory was ours!

So, somewhat controversially, Chipstead, by virtue of not having lost a game, were named as the champions.

A big thank you goes to all the teams who participated and made the event happen, with special thanks to Molinaro's Catering for running the BBQ, Tim Smith for running the Bar, Hugh Blackburn for getting the pitch ready, and Matthew Griffin for looking after all the match administration.