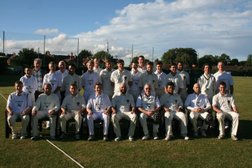 President’s day is traditionally held in early September and generally involves some form of informal cricket bridging either the youth and senior teams or an individual competition. However, this year was a little different as the club had the opportunity to play against the Crusaders Australia touring side and thus President’s Day was combined with this exciting fixture.

Crusaders Australia was founded in 1977 and has been going on annual international ever since. The primary aim of the Crusaders tours is to “help facilitate the development of promising Australian cricketers”, whilst a number of veteran players support the youngsters and get the opportunity to play cricket in a number of exciting locations.

When the Ellerslie boys rocked up at 12.30 on Sunday the Crusaders were already half way through an extended warm-up. Skipper, John Wakeling, made the Ellerslie President’s XI well aware that our foreign friends wanted to win this game emphatically and that we were to give as good as we get out in the middle and no apologies for that.

The Aussies won the toss and chose to bat first with the game making a slightly earlier start than initially intended with the possibility of localized showers on the cards. Eddy George and Dan Cawley were the opening bowlers for the home side and the batters for the visitors were Jones and Rizio. The Ells defiantly got the better of the early exchanges as Cawley bowled a peach to Rizio (6) who shouldered arms to a delivery, which swung away and seamed in to take the top of off. At the other end ‘Steady Eddy’ was living up to reputation, tying up runs from the Elmtree Avenue End on his way to figures of 8 overs, 4 maidens for just 13 runs.

Dan Footitt replaced Cawley and after a couple of solid overs got cut away numerous times by both Jones and the new batsman English. Wako, decided to change things up and thus brought Sumun Shrestha on for Dan, whilst Kane Wilson replaced Eddy (43-1 off 16). The leg spin of Shrestha did the trick for Jones (24) who went for a misguided gander down the wicket and was promptly stumped by wicket keeper David Perry.

After a pedestrian start (57 from the first 20) English and Harbinson began to build a strong partnership, continuously hitting the boundary fielders along with an occasional boundary, but by no means getting away from the home side. The other Shrestha, Sunil, tagged in for Kane and soon came up trumps, getting a length ball to spit and take the glove of Harbinson (32) leaving David with another dismissal.

The Crusader’s Michael Day came in at 5 but soon retired hurt for 2 after suffering a lower body strain of some sort. Kingkade (12*) swapped with Day and supported English to strike a few big blows against Ellerslie’s death bowlers Raza, Dan and Sunil. Closing in on the end of the innings, English smacked Footitt straight down the throat of the skipper, obviously putting his best fielder in the key spots, and was dismissed for a very well put together knock of 74. The Crusaders finished on a total of 180 for 4; a score that they were pleased to have reached from where they were but that the locals felt was a good 20 runs short.

Tea highlights: Tea took on a very British feel, the best of which were the scones with strawberry jam and cream and the Victoria sponge, which was accompanied by a strong selection of triangle sandwiches.

At the top of the order for the President’s XI were Simon George and John Wakeling who started scoring quickly, both batsmen feeding off some leg side bowling. A short spell of tight bowling from Sweet and Pesco, which included 3 maidens in 6 overs, putting some pressure on the Ellerslie openers who were helped out by some handy extras that allowed the score board to tick over.

The leg spin of Jones and the left arm orthodox of Kingkade replaced Sweet and Pesco, who had failed to make a dent into the Ells top order. However, Both Simon and Wako had no problem pushing the singles and tucking into anything loose against the tandem and in the 18th over Simon brought up his half century and an over later the pair had amassed a hundred partnership.

It wasn’t until the 21st over and 116 runs were on the board that the Crusaders picked up their first wicket. Wako went back and looked to work Jones into the leg side but the ball snuck between bat and pad and clattered into the stumps. David Perry, batting at 3, didn’t last long as he too played across a delivery from the leggy, this time getting trapped leg before. The wicket was by no means traitorous but there had been some variable bounce throughout and both dismissed batters may have felt that some low bounce contributed to their downfall.

Kane Wilson joined Simon at the crease at 123 for 2 off 23. Simon continued to go strong and long, planting Jones over midwicket for a one bounce four followed by Kingkade getting swung away for 6 in the same region. The Crusaders, needing an old school Ellerslie collapse, brought their openers back on for a stint. It did bring the dismissal of George for 81 but the breakthrough came with the score on 152 in the 31st over but with 7 wickets in hand the game looked all said an done. Kane (19*) and the new batter Suman (14*) in due course ticked over the 180 needed in the 38th over of the game to give the Ells a 7 wicket victory over the touring visitors.

At the end of the game the Crusaders captain presented Simon George, Eddy George and John Wakeling with an item of Crusaders merchandise for their hand in the Ellerslie victory. Swan Richards OAM reiterated comments of what a enjoyable day and welcome they had been given by the West Bridgford based club and thanked everyone who had made the event such a success. In addition, President Ian Perry presented John Wakeling with the Presidents Cup for their win.

Both sets of players and the many one spectators and supporters stayed long after the game to partake in some beer tasting, tasty rolls for nosh, some prize winning from the raffle and some good conversation.

In the past two week Ellerslie CC has their annual youth festival, a 3 day long beer festival and welcomed an historical Australian touring team to the club’s President’s day. It is without any doubt that this little spell has been a roaring success, both on and off the field. The club has built some strong momentum; has it’s 3rd XI sitting top and 2nd XI in second in their respective divisions and the 1sts got back to winning ways this past weekend.

We would like to wish the Crusaders the best of luck with the rest of their tour and thank everyone who made their day and the past two weeks so special. There are simply too many people to list them all!