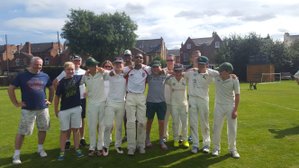 On Sunday 27th August the Family Friendly match was held at Little Bounds.

Where two teams that were made up of a mixture of adults and juniors came together to battle it out in a 25 over match.

The Destroyers' won the toss and chose to bat first. They scored 168 for the loss of 6 wickets.
When Newell's Army came to the crease, they put on a great run chase taking the game in to the last over, but were short by 10 runs.

A thoroughly entertaining match that was enjoyed by everyone who came to support and for those who participated.

Thank you to everyone who helped out and look forward to the next match!