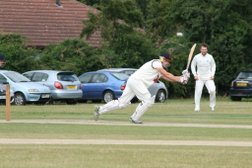 On the back of a three match unbeaten run (one win and two winning draws) our 1st XI welcomed Belvoir to Little Bounds as we moved into the business end of the season. Your correspondent was tasked by skipper John Wakeling with taking an up-to-date photograph of his team and then stayed on for the first innings of the match before spending the post tea session with the Seconds on Stamford Road (please see the Fordians report).

Firstly there were the usual gardening duties including “feeding” the hanging baskets and a bit of "dead heading" during which time Kane Wilson nicked off, to coin the immortal batting phrase, without troubling the scorers. Gathering my camera, I started a slow perambulation of the playing area to get a variety of angles to the action shots. Pretty much the first photograph I took was a delivery exploding from the surface, taking Wako on the glove and ballooning away to be caught. Our captain ruefully prodded at the disturbed surface, pointed it out to the non-striking batsman, Hamish Moore, and duly departed.

So it was evident from the outset that this would not be an easy wicket to bat on with its variable bounce and runs would be at a premium. This was my first look at Hamish who has a compact technique and strikes the ball particularly well off his pads. The early skirmishes were given a kick start when Hamish took four boundaries off Joe Bottomley’s 5th over and showed a determination to go down the wicket to disrupt the bowlers’ lengths. This perhaps worked even better than he anticipated as the Belvoir wicket-keeper decided to come up to the stumps for the seamers. This resulted in a number of wides and byes and indeed at one stage extras (eventually a towering 49) were keeping pace with Hamish and ensured that the innings did not stall while the middle order struggled, in particular, with off spinner Greg Oldfield. Nobody stayed for long with Hamish although everyone tried to dig in. Nick Hobbs drove round Oldfield having just struck him for a powerful blow over mid-wicket, Suman Shrestha was LBW to the same bowler, and Simon George "enjoyed" the vagaries of the wicket by being struck on the shoulder by one spinning delivery and then on shouldering arms found the ball jagging back from well outside off stump to disrupt his stumps (Ed: well that is what he tells me!). At this time (119-5 off 32 overs) the consensus seemed to be that 150 would be par and that Hamish was the key.

Hamish was eventually caught and bowled by Oldfield for a very well compiled 78 (11x4 and 1x6) with the score at 170, but what turned out to be the crucial part of the innings was Dan Footitt combining a very straight back in defence with a particularly aggressive approach to anything off-line and soon the latter part of the innings saw a distinctly heavy flow of runs. Even the off spinner took some tap and by the time Dan was caught at deep cover he had crashed his way to 65 (6x4 and 5x6). Both Ollie Taylor and M T Raza added some useful quick runs to set up an imposing 245/9.

I should imagine the team took their tea with no little confidence. Sophie Taylor’s repast was enjoyed by all and I am told the plumb flap jacks and the coconut and chocolate cookies were particularly tasty.

While I was following the Seconds run chase against WB, one which became increasingly fraught and a little stressful, there were no such concerns back at base as wickets fell on a regular basis with both Hamish and Dan once again confirming their all-rounder status with three wickets each – with three for Suman’s spin as well. Apart from an aggressive flourish from their eight wicket (Lewis Ryan and Phil Irvine) the visitors were bowled out in their 38th over for 128, losing by 117 runs. It is also worthy of note that only 3 extras were conceded (1 bye and 2 wides), so good disciplines there,

So another fine win and 20 points for our Firsts who are now second in “A”, albeit it is very tight at the top. The next game is against leaders Hucknall. A game to look forward to.