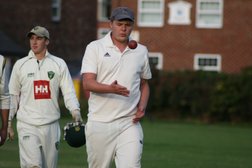 Firsts sign off with narrow win to secure second place

We welcomed Balderton for the Firsts’ final game of a successful season in “A”. Hucknall are deserved champions but there was a club all time high of second to play for. Equally, if Balderton won (hence getting 20 points) and we got no more than 3 bonus points this would mean them taking the runners up slot. So still plenty to play for.
When I arrived at LB the Ells were 39/1, Kane Wilson having made a swift departure. Then on 51 our star batsman of 2015 Hamish Moore was caught cutting at Luke Endley. The innings then developed into an attritional battle on a wicket that was a bit up and down as evidenced when Suman Shrestha was pinged on his helmet when a spinning delivery stood up on end. Endley probed away with his seamers, always asking questions. He has got passed 50 wickets this season which is a fine effort. Neither Suman nor Jon Wakeling could dominate the spinners. In breaking the shackles with a blow over wide mid wicket Wako tried to repeat the shot and was bowled: 106/3 in the 32nd over.
Out of form Simon George, after settling in, opened up with some pleasant driving and pulling and the stage was set (we hoped) for the acceleration: 133/3 off 40. Alas there was to be nothing of the kind. Suman departed for 28 and Simon misjudged a second run and failed to make his ground. Wickets fell regularly (Harry Capstick picked up 4 with his varied seamers) and the only moment of note was a straight six by Oli Taylor. 172/9 was the end result. 2 BPs – tantalisingly 3 runs short of another.
Balderton’s target was gettable but the feeling was they would lose wickets – we needed 5 of them. The early signs were good as Hamish settled into bowling 16 overs off the reel with his left arm spin, taking a caught behind to Simon in his first over. Wako did not take the gloves as he was hobbling around like an “old man”. Hamish was soon in the action again. Oli Taylor tipped a lofted drive from his position at short extra cover and adjusting his balance Hamish flung himself forward to take the catch just off the turf. It was 53/3 as Simon took another snick behind off the Hammer. Balderton stuck at it and when Hammer was done (3 well earnt victims) they were beyond 100 with 4 down. Surely we would get one more wicket?
Wako turned to his leggies. This usually means runs and wickets - or both. The first couple of overs from Oli and Suman were plundered. Would the visitors try to nurdle their way home home now as they appeared nicely set up at 120/4? Not so. Dave Makey, who had played a cautious hand for his 41, a little surprisingly tried to hit Oli over the top and was caught by Dan Footitt falling back at long off. Cue widespread celebration! The end came pretty quickly. Endley went on the attack including a smart switch hit off Suman but Oli was not to be denied and had pride of place with 5-18 as Wako took the final wicket with a tumbling catch. A win by 12 runs and second place on 266 points. A fine achievement by Wako and the lads, as was the superb teas spread. Reasons to be cheerful!
Share via
FacebookTwitter
https://www.pitchero.com/clubs
Recent news