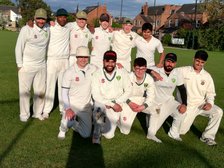 First XI enjoy the taste of victory at Little Bounds

On yet another cold, grey and showery match day our young Ellerslie first XI turned in a great team performance to earn victory in a tense finale to the Division A match against Balderton. Joyful scenes erupted at 7pm as the sun finally broke through the clouds and Josh Steer took the final wicket that was needed for victory after Balderton's last wicket partnership of 48 runs was finally broken, only 8 short of their target. By the close of play our Skipper John Wakeling had been at the ground for 12 hours and his early morning work to produce a playable wicket was rewarded by the commitment and character that his team showed to claim their first victory of the season.

The game started inauspiciously for Ellerslie, losing the toss and being asked to bat in bowler-friendly conditions on a slightly damp wicket, however our openers Wakeling and Wahid started well with a calm and solid first wicket partnership of 43 that provided encouragement to the team. The top and middle order worked hard but couldn't deliver a partnership of more than 19 until Duncan Hulbert was joined by Zac Rahman on debut. The two young batsmen delivered a positive and attractive partnership of 64 that changed the momentum of the game as the bowlers became frustrated while Ellerslie were given something to cheer with some excellent shots for boundaries. Unfortunately neither could stay until the end and the tail were able to add only a handful of runs before being bowled out from 46.2 overs. Ellerslie finished on 181 with Duncan Hulbert top scoring on 45 and valuable contributions from Amir Wahid (32), Zac Rahman (29) and John Wakeling (21). Would the total be enough with 53 overs available for Balderton to chase it down?

Ellerslie started on the attack with overseas player Sid Jhurani opening the bowling with his left-arm spin from the Elm Tree Avenue end; Sid delivered a wicket in the first over, bowling the opener for a duck and the belief and confidence of the fielding team was visible from that point on. Zac Rahman opened from the Tennis Centre end and delivered an excellent 7 over opening spell of accurate and lively seam bowling that pressured the batsmen. After 10 overs Balderton were 22-1 and struggling, unable to score and looking only to survive. Sid bowled out the other opener in his 6th over and delivered the scalp of their overseas player in his 7th over after a smart catch at gulley by Duncan Hulbert. This was followed up by another wicket in his eighth over after a smart stumping from gloveman Matthew Armstrong who excelled in partnership with Sid. At 36/4 after 15 overs Ellerslie were in charge.

Balderton's middle order fought back with a 4th wicket partnership of 41 to reach 73/4 off 22 but Sid delivered 2 crucial wickets in the 12th and final over of his spell with more good work from Armstrong behind the stumps to shift the momentum back in favour of Ellerslie. Ellerslie's change bowlers struggled to maintain the pressure and Balderton worked their way back into the game finding themselves at 99/6 after 29 overs with Chris Dobbie looking untroubled in the middle. Wakeling brought Rahman back into the attack to bowl the 30th over and he immediately broke the deadlock, Ellerslie again scented victory after the seventh wicket fell and a devastating second spell of 3/14 off five overs from Rahman brought Ellerslie close to victory with Balderton reeling on 126 for 9 after 36 overs. With a spirited Barnsdale joining Dobbie in the middle, Ellerslie struggled to find the last wicket and the Skipper turned to his young seamers Finlay Hulbert and Josh Steer in a final throw of the dice as Balderton edged towards their target. Hulbert's pace troubled Barnsdale in particular who played and missed a number of times but the wicket would not come. Finally with Balderton only eight runs short and palpable tension around the ground from both players and supporters, Steer produced the winning ball with Barsndale trapped LBW in the 47th over of the Balderton innings.
The fielding team erupted in celebration and deservedly enjoyed their moment after a hard-earned and thrilling victory.
Excellent bowling from Sid Jhurani with 6/26 from 12 and Zac Rahman 3/36 from 12 led the way to victory.