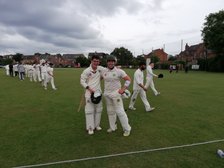 Ellerslie pulled off an impressive victory over Notts Unity Casuals in Division A of the Gunn and Moore South Notts Cricket League on Saturday.

The blazing June heatwave had well and truly come to an end on Friday with 24 hours of persistent rain ahead of Saturday's fixtures and it was a cool and overcast Saturday morning at Little Bounds that greeted the players and officials for the basement battle in Division A. Ellerslie fielded a strong batting line-up, recalling Adam Newell after scoring 98 in the seconds last week and welcoming new-signing Asif Haq for his debut at Little Bounds. Matthew Armstrong who has been excellent behind the stumps had bid farewell until next season and the gloves were taken by Duncan Hulbert.

The game started well for Ellerslie with Skipper John Wakeling winning the toss and electing to field. Ellerslie's young opening bowling partnership of Zac Rahman and Finlay Hulbert were unable to make the breakthrough and skipper Wakeling made an early change bringing Patrick Gada into the attack and was rewarded with the wicket of opener Hamzah Kahn in the 12th over. The first wicket partnership of 59 proved to be the most significant of the innings for Unity and after the initial breakthrough the Ells chipped away at Unity taking wickets regularly through patient and determined cricket. Unity were finally bowled out for 270 off 49.3 overs with a fantastic performance by Patrick Gada, rolling back the years to take 5 for 67 off 12 overs in two spells. Zac Rahman (2), Sid Jhurani (2) and Zac Shaw (1) all chipped in with wickets while Finlay Hulbert proved to be the most economical bowler on the day.

At the interval Ellerslie could afford to be be reasonably confident needing a run rate of 5.5 per over on a flat pitch and with a strong batting line-up but with recent performances in mind there had to be some doubt as to whether the batsmen could deliver.

Wakeling and Waheed strode to the wicket at 4:30 pm to open the innings under grey skies. After a steady start by the opening pair Waheed holed out to point in the eighth over on one run. Asif Haq joined the Skipper and took little time to transform the chase hitting his third ball for 6 into Elm Tree Avenue; thus began a pivotal partnership for Ellerslie. Haq maintained his momentum blasting his way to 62 off 46 balls in a second wicket partnership of 105 with skipper John Wakeling. Haq gave the Ellerslie faithful something to cheer with 10 boundaries including four maximums and some broken roof tiles in Elm Tree Avenue.

By the time Haq was bowled out in the 22nd over Ellerslie were in command with a required run rate of less than 4 an over and Wakeling well established on 43. The Skipper was joined at the crease by Duncan Hulbert and so began a patient and controlled match-winning partnership of 120. After an early let-off when dropped at mid-wicket on 6, Hulbert buckled down and he and Wakeling looked untroubled as they nudged the ball around the field, running well and exploiting a poor fielding display by Unity.

Wakeling reached his 50 in the 29th over off 84 deliveries and the hundred partnership was delivered in the 41st over with Hulbert reaching his half-century in the 42nd over off 68 bowls with three 4s and a 6. Tension mounted as the left-hand /right hand partnership moved seemingly inexorably a ton for the skipper; finally the moment arrived in the 43rd over as Wakeling pushed to long off and called for a single. The Ellerslie faithful were delighted and the Skipper overjoyed, delivering a well-deserved century, his first since 2018. Victory was within sight at the end of the 43rd over with only a further 30 runs required and a well-set and untroubled 3rd wicket partnership in place; everyone present expected these two to see it through when drama struck in the 44th over..... Wakeling took a single to point and an overthrow by the fielders tempted the batsmen to take a second run. Wakeling stumbled and fell midwicket, dragged himself up to continue and was struck down again with cramp allowing the wicketkeeper to run him out whilst he lay prone, midwicket.

Suddenly Unity were back in the game with a new batsman, Adam Newell at the crease at 7:30 pm facing their fast bowlers on a decidedly murky midsummer evening. Abneer Irfan dismissed Newell lbw for 0 after only 4 balls and the tension began to mount. Zach Shaw joined Hulbert at the crease for the 45th over with 25 runs still needed from the remaining six overs. Shaw allowed himself a little time to settle and with only 3 runs coming from the 45th over Unity were still in the game. The batsmen then took control, scoring 9 from the 46th and 8 from the 47th over and it was left to young Hulbert to finish the game in the 48th over with four runs smashed through long-on.

Bravo! to the Skipper Wakeling and Patrick Gada and congratulations on an excellent victory and committed team performance from this young Ellerslie first XI.