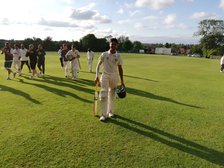 Ellerslie first XI defeated Calverton at the Rookery on Saturday in a tense run chase to notch up a second successive victory and build momentum in Division A of the South Notts Cricket League .

Skipper John Wakeling won the toss and had no hesitation in electing to field after last week's successful run chase and with a long batting line-up on the team sheet. Ellerslie's regular young opening bowling pair of Zac Rahman aka 'Noodle' and Finlay Hulbert took the new ball against a depleted Calverton team and spirits were high after Noodle clean bowled one of the openers in the second over of the innings. The young bowlers soon learned however that Calverton's outfield was, as usual, fast and unforgiving to the bowling side and that the groundsman had prepared a good batting track as Calverton moved to 59/1 after 12 overs. A double bowling change from the Skipper saw Patrick Gada and Zach Shaw introduced into the attack and immediately the pressure was back on the batsmen with the run rate stifled at each end. Gada made the key breakthrough in the 17th over with Gangotra caught behind for 43 and the partnership of 69 with Peel broken. Gada followed this up with the key wicket of Calverton Skipper Ryan Evans caught behind for 1 in the19th over and things were looking up for Ellerslie.

Peel was joined by Williamson in the middle and the two batsmen patiently set about building a partnership, holding firm until left-arm spinner Gandhi dismissed Peel for 49 off the last ball of the 30th over with Finlay Hulbert taking the catch at short fine leg as the batsman finally played a loose shot in attempting the sweep. Jhurani dismissed Williamson c&b with the very next ball and with two new batters at the crease and the Calverton top order removed Ellerslie were hopeful of running quickly through the tail.

After losing young Cameron Andrew, bowled by Gandhi in the 34th over Calverton rallied and worked hard to pick up runs where they could and to bat through their overs. Gada returned to bowl out Darren Wright in the 39th over but Ellerslie were then frustrated by an eighth wicket partnership of 49 between Calum Jayes and Richard Lee. It was the 49th over when the breakthrough came, Duncan Hulbert removing the bails off the bowling of Sid Jhurani for his first stumping at senior level and Jayes had to depart after compiling 41 very useful runs for his team. Zac Rahman followed up in the 50th over to clean up the tail claiming the final two wickets with the last two balls of the innings; Kyle Welch was caught behind for two and then from the next ball, John Nestor was clean-bowled for a golden duck. Calverton finished on a total of 200 all out with Rahman taking 3 for 48, Gada 3 for 38 and two wickets each for the left arm spinners Gandhi and Jhurani.

At the interval Ellerslie were feeling optimistic requiring only 4 an over and with a long batting line-up and a decent pitch to bat on but the chase subsequently proved to be on a knife edge for much of the innings. Skipper Wakeling opened the innings with his regular partner Waheed but things started badly for Ellerslie with Waheed clean bowled by Kyle Welch on the last ball of the first over for a six-ball duck. Asif Haq joined Wakeling at the crease but the pair were unable to reproduce their match-winning form of the previous week with Wakeling out bowled by Kyle Welch for 8 runs in the 7th over. Calverton were understandably jubilant at this point having taken the prized scalp of the Ellerslie skipper who was unable to repeat his batting heroics of last week.

Duncan Hulbert joined Haq in the middle and after a nervous start they soon settled into an untroubled partnership beginning to look in control and capable of bringing the run chase home. Calverton turned to spin at both ends and arguably it became too easy for the batsmen, Haq going big while Hulbert readily nudged the ball around the field. Both batsmen were the architects of their own downfall with Haq holing out at long-on for 31 off the bowling of Ryan Evans in the 19th over. His partnership of 53 with D Hulbert proved to be the biggest of the Ellerslie innings but with the total at only 76/3 when Haq departed there was much work to still to do. Rahman joined the younger Hulbert and again the batsmen looked comfortable together, readily compiling runs and in no danger from the bowlers; what could possibly go wrong? Ellerslie then proceeded to press the self-destruct button, Hulbert sweeping to the long midwicket boundary and needlessly taking on the fielder for a second run. Disaster struck as the young Cameron Andrew delivered an accurate bullet-like throw to the stumps and Hulbert's despairing full length dive wasn't quite good enough as although across the line, his bat wasn't grounded. Ellerslie found themselves 91/4 in the 23rd over and all the top-order batsmen dismissed.

Calverton really began to sniff an unlikely victory in the 30th over when Zac Shaw repeated the previous crime and was run out for only 5, the batsmen having foolishly taken on Cameron Andrew again -this time it wasn't even close. 116/5 became 138/6 in the 35th over when Josh Steer was caught at cover for 12 off the bowling off Kyle Welch and then in the very next over the incoming batsman Patrick Gada popped one up to Ryan Evans at cover and was out for 1 run off the bowling of Cameron Andrew. Things went from bad to worse two overs later when Sid Jhurani was bowled out by the 15-year old Andrew who was single-handedly demolishing Ellerslie's middle order.

Rahman had been batting confidently while helplessly watching wickets falling at the other end. When his opening bowling mate Finlay Hulbert strode cheerfully out to join him for the 38th over there were still 49 runs required to win with 12 overs remaining but only 2 wickets in hand. Calverton were bouyant in the field in anticipation of victory but they underestimated the NTU chums and the elder Hulbert sibling ably supported the classy 'Noodle'; the batsmen's confidence grew and the two youngsters were clearly enjoying themselves at the crease, trusting each other on strike and readily keeping up with the required run rate. The Ellerslie team and supporters were a little more anxious, recognising the differential in running speed of the two batsmen and fearing another calamitous run-out but after a few calming words from the Skipper at the sanitisation break after 42 overs they looked totally in control. The sun came out for the final part of the match and Calverton began to lose faith as the batsmen chipped away at the total with increasing ease.

Victory arrived off the 5th ball of the 49th over courtesy of some tremendous batting under pressure by Zac Rahman who finished on 67 and enjoyed a 9th wicket partnership of 49 with F. Hulbert.

Hats off to Noodle for his match-winning performance and congratulations to the young Ellerslie first X1 on their second successive victory.