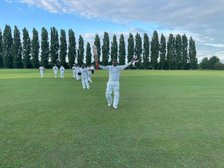 Skipper leads the way to victory with record-breaking innings

Ellerslie first XI skipper John Wakeling reached a significant milestone as all-time leading run-scorer for the club on Saturday as he plundered his second century of the season against Notts Unity Casuals on the way to another victory for Ellerslie in Division A of the South Notts Cricket League.

The Brian Wakefield Memorial Ground, home to Notts Unity Casuals was looking in tip-top shape on Saturday for the visit of our first XI and after having beaten Unity only 3 weeks previously the Ells were feeling confident and were happy to be asked to field first and thus to try and repeat their successful run chase at Little Bounds. Skipper John Wakeling decided to open with spin at both ends and he was rewarded by excellent bowling from both Sid Jhurani and Zach Shaw. Unity, seemingly unprepared for this move were 5-0 after the first five overs, showing no evidence of any plan to score runs against either bowler and apparently having survival as the only objective. The Unity openers hung in there until the 10th over when Hamzah Khan's wicket fell, bowled by Zach Shaw for 10 runs. Shaw claimed another victim in his next over when the incoming bastman, Krutarth Dave was stumped by the Ells young keeper Duncan Hulbert. At the end of the 12th over Unity were 24-2 and Ellerslie were in the ascendency.

Shaw and Jhurani continued with their right-arm and left-arm spin bowling partnership and Jhurani made the next breakthrough in the 19th over bowling Digwa, who had looked uncomfortable throughout for his 15 runs off 58 balls. So began an increasingly fluent batting partnership between skipper Ibraheema Asif and big hitter Haider Khan for the home team. Once Shaw and Jhurani had completed their overs Wakeling made the decision to continue with spin at both ends pairing left-armer Chiraag Ghandi with born-again off -spinner Finlay Hulbert. The skipper surprised everyone with this move, not least Hulbert himself who has been accustomed this season to bowling medium-pace.

The scoring rate increased with the two most accomplished batters facing two young bowlers but Unity were let off the hook on more than one occasion by dropped catches as Haider Khan repeatedly chose the aerial route. Finlay Hulbert made the breakthrough in the 30th over with the help of his younger brother as Asif was stumped for 41 runs off 48 balls after a partnership of 54 with Haider Khan. Khan however was undeterred and continued his assault on Ellerslie's bowlers after being joined in the middle by Dan Williams; he hit the ball cleanly to clear the long straight boundary on a number of occasions, even dispatching one ball from Hulbert into the adjacent golf driving range.

In a double change, skipper Wakeling brought Sunil Shrestha and Josh Steer on to try and regain some control as seam bowling made its first appearance in the 35th over. Haider Khan continued to attack and more catches were dropped until finally he holed out to a well-taken catch by Ghandi, running in from the long-on boundary, off the bowling of Steer in the 40th over. Haider Khan made 80 runs off 72 balls including eight boundaries, four of which were maximums and he had dragged Unity back into the game with his aggressive approach. Williams and Ravi Gouni added a further 71 runs, with Gouni run out on the final ball of the 50th over by Finlay Hulbert.

Shaw and Jhurani finished with decent bowling figures of 2-28 and 1-39 respectively, off 12 overs in each case. All the other bowlers came in for some punishment as Unity managed to compile a total of 232-6 and so requiring Ellerslie to score at just over 4.5 an over to win the game.

Duggan and Wakeling opened the batting for Ellerslie and took the crease at 4:30pm in pleasant conditions as the grey and overcast morning had given way to warm sunshine in the late afternoon. Unity's youthful pace bowlers led the attack and whilst posing some threat they also provided some scoring opportunities and after 5 overs the batsmen looked to have made a good start on 29-0. The balance shifted considerably in the sixth over however when the pacy Abneer Irfan took two wickets in quick succession; Duggan gloved a short ball to the keeper only for the incoming bastman Amir Waheed to be caught behind for 0 off his second ball. Duncan Hulbert joined Wakeling in the middle a little earlier than expected and wasted no time in dispatching the final ball of Irfan's over for four through backward point.

Wakeling and Hulbert looked to be forming a decent partnership having seen off the opening bowlers but unfortunately Hulbert took a leading edge to a short ball from Shahzad Ahmed and was easily caught by Digwa in the cordon. Unity were jubilant sensing a potential batting collapse by Ellerslie as the visiting team found themselves at 52-3 after 12 overs. The incoming batsman was Asif Haq but he was unable to keep the Skipper company for long as he departed, bowled by Giri for 1 run in the 13th over.

Zach Shaw joined Wakeling in the middle and played with discipline to provide a steady foil for the skipper who was looking increasingly comfortable at the crease. This partnership put Ellerslie back on track and allowed Wakeling to take control as the two put on 61 runs for the 5th wicket before Shaw fell, bowled by Haider Khan for 15 runs in the 29th over. Josh Steer joined Wakeling in the middle with the skipper on 59 and Ellerslie requiring a further 114 runs in 20 overs to win the game. These two batted calmly and looked in no danger against Unity's change bowlers but there was still work to be done in increasing the run-rate and getting Ellerslie over the line. After 40 overs Ellerslie required a further 50 runs to win and although Wakeling was untroubled by the bowlers, he was looking increasingly tired between the wickets as he progressed towards a second century in 3 weeks and so there was still some tension in the watching Ellerslie ranks. Confidence grew in the 42nd over as 13 runs were plundered from the bowling of Ahmed and then a great cheer erupted in the next over as the Skipper reached his century in style with 4 runs through midwicket. Steer grasped the nettle in the 45th over to help his Skipper out with consecutive 4s off Giri and when he departed for an excellent 41, bowled by Gouni off the last ball of the 46th over the win was within sight with only 17 runs required off the last 4 overs. Sid Jhurani came out to bat as dusk began to fall and he and Wakeling subsequently reached the target of 233 in the 48th over at 8:05 pm on a lovely summer evening.

Skipper John Wakeling batted for the entire innings scoring 113 off 142 balls with 11 fours to steer his team to victory with consummate ease. His class was evident for all to see and his second century in three weeks also cemented his place as all-time Ellerslie leading runs scorer with a total of 7587 from 215 innings at an average of just less than 50.

Bravo Skipper and well done to Ellerslie for a fourth win of the season!