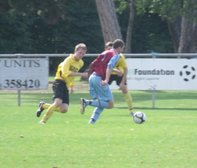 High flying Westfields too much for battling Ellesmere

Ellesmere Rangers made the trip to Hereford on Saturday 27th August to face high flying westfields at their well appointed Allpay Park venue.

Managers Burton and Mills were once again disappointed to be travelling without many of the first team regulars because of the injury and suspension situation. The high scoring Hereford men were well matched during a competitive first half and although they shaded the possession Ellesmere more than matched them with goal scoring opportunities.

Westfields striker tested Sam Jones in the Rangers goal on a couple of occasions but he was a match for them. At the other end Steve Towers had a good chance from a corner cleared, Anwar Alugbon hit the westfields post and Darren Beech stung Jamie Moores hands with a well struck shot.

Rangers were caught cold straight after the restart when they failed to effectively clear from a corner and Kear was able to put the hosts one up with a shot from close range. Ellesmere were far from out of the game as is swung from end to end,a Kevin Renshaw free kick was well saved by the keeper and bundled away to safety by the well organised Westfields defence, and soon after that he hit a curling shot that was cleared off the line.

All of Rangers efforts to get back into the game were undone in the eightieth minute when a well struck corner was headed into the net to effectively end Rangers chances.

Manager Burton replaced the injured Dan Price in the dying moments and missed the opportunity to score when the lively Renshaw created a half chance for him to add a little more respectability to the score.