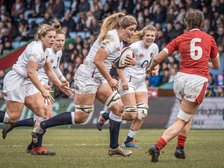 Our former player Poppy Cleall has been named 2021 Women’s Six Nations Player of the Championship after winning the first ever public vote for the award.

Cleall was nominated for the award alongside fellow England forward Zoe Aldcroft and Caroline Boujard of France by a panel featuring the head coaches, captains and an equal representation of members of the media from all six competing nations.

She becomes the second ever winner of the award, following in the footsteps of Emily Scarratt. Cleall was the overwhelming choice of fans, winning 62% of over 12,000 votes cast.

“It’s a huge honour to be named Player of the Championship. I am not only a rugby player but a massive rugby fan and have been in awe of some of the games and moments in this tournament,” said Cleall.

“It’s been such fun and a great occasion in women’s rugby to be a part of.

“It’s already a huge moment in my career to win back-to-back titles with this team but to win this award is thanks to all the hard work of those around me from my coaches, team mates and my family.

“Representing the Red Roses is a massive honour and one I hope I do proud. This tournament has been one-of-a-kind and I hope other female rugby players and athletes are given the same opportunity to be the best they can be.”

The 28-year-old was a force to be reckoned with at the back of England’s scrum, winning Player of the Match against Scotland after a powerhouse performance alongside sister Bryony and following up with the match-winning try and another Player of the Match award in the final against France.