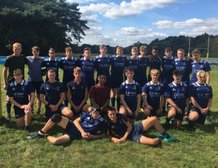 Our Colts lost away to Farnborough on Sunday despite getting off to a flying start. A combination of strong rucking and continuity enabled the colts to drag Farnborough’s defence in tight creating space out wide. The backs spotted the opportunity well and good hands enabled Joshua Balais to go over on the right of the posts. Ellingham, unfortunately, lost a bit of concentration for the rest of the first half and they allowed the home team to play their game. The colts defended well but simply allowed Farnborough to have too much ball. Two tries followed as a result of the imbalance in possession. Ellingham played most of the rugby in the second half and looked strong as they went through the phases. The pressure paid off with a try for Sam Barrow. Farnborough struck back to keep their noses in front but it looked as though the visitors would steal a win. Ellingham probably could have scored at least two more tries if it were not for one or two hesitant moments in decision making. Farnborough closed out the game by kicking a penalty right at the end – a mirror image of the 1st XV fate the day before.
Share via
FacebookTwitter
https://www.pitchero.com/clubs
Recent news