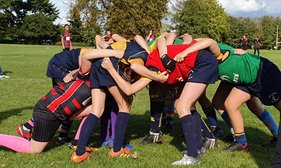 Playing our friends at Alton Girls

Sunday is game day and the weather put the 'Sun' in Sunday.

Travelling mob handed with 21 girls we rocked up at Alton raring to go and full of beans. With Alton only having 4 girls we quickly split up into 4 teams incorporating them into our squad.

Playing 4 small sided games to start with ,the girls took no time in displaying some lovely rugby , passing from wing to wing in one game ending in a try. I saw individual tries run in from deep and a large slice of team effort culminating in scores.

To end the day we went all out (just like a Bake Off show stopper ). The girls formed 2 teams of 12 and went for it. The catches from kick off were very good today and handling in general was much better than in previous games. Some real beautiful passages of play went on with passing and support skills at the fore front . Rucks were hit and balls were recycled over and again unleashing the speedsters to do what they do best, score tries.

Considering the girls had to play against each other and alongside a depleted Alton team they gave 100% and hopefully enjoyed themselves.

Special mention to Sophie P who was awarded player of the day by the Alton team , her work rate was phenomenal today. Thank you to Alton for hosting us and to all of the ERRFC Girls parents for their never ending support. Final thank you to Duncan for his reffing skills, his new nick name is "Play on" ?

Big well done to all the girls today, they are truly a lovely bunch and a force to be reckoned with.