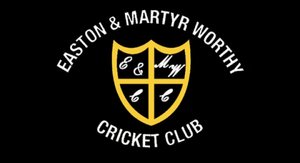 Easton 2’s visited Crown Taverners at a quaint little ground behind the Crown & Cushion pub-some might describe it as ‘idyllic’.
A reasonable wicket with a tinge of green persuaded skipper Dave Ling to ask CT’s to bat with Rae Lockyer and Ben Stanbrough opening the bowling for Eastons.
Opening bats Paul Edmonds and Rob Knowles made a steady start, moving the score to 25 when Rob was caught by John Sparks (a brilliant catch!) in the covers. 25 for 1 became 31 for 2 when Paul was caught by Ling off Stanbrough. 16 year-old Sky Mitchell took over from Ben and he had number 3 bat Hassan plumb lbw for 12 with the score on 56.
A 50 partnership between Vijay and Pravess took the score to 106 when Pravess was run out by Ling for 17. Young Arthur Lee, turning his arm over for the first time this year bowled steadily to record figures of none for 11 off 4 overs. Veterans Trev Foreman and Trevor Yeates then took over the bowling responsibility but could not contain Vijay and Walker who moved the score from 137 for 6 to 184 for 7 when Vijay was run out by another direct hit by Keeper Ling.
The return of Lee and Easton’s man of the match Sky Mitchell, together with a superb throw by Mitchell to run out Walker, restricted CT’s to 197 for 9 (including 19 wides).
Bowling figures were: Lockyer 1 for 26 off 7, Stanbrough 1 for 20 off 6, Mitchell 4 for 45 off 10, Lee 0 for 39 off 9, Yeates 0 for 27 off 5 and Foreman 0 for 38 off 5!
A good tea was enjoyed by all and John Sparks and Paul Sanders opened the batting for Eastons at 5.30pm. Both openers got off to a cracking start with 3 fours each but with the score on 33 Paul was bowled by Davis for 19 off an unlucky inside edge. 14 year old Joey Mitchell batting at 3 looked the part, playing one superb shot down the ground but he was run out despite a great dive to try to get in.
Arthur Lee then holed out for 0 which brought skipper Dave Ling to the crease. In typical fashion Dave attacked and thrashed 9 fours in a combative innings of 39. John Sparks then got out when the catch of the match in the deep (even better than his own) ended his innings. At this stage Eastons were 91 for 5 but a good partnership between Adrian Lee and Ben Stanbrough took Eastons to 128 when Lee was adjudged caught down the leg side for 9. This did not deter Stanbrough and a flurry of boundaries by Ben took the score to 161 for 7 when Ben was stumped by a ricochet back off the keeper’s pads! Ben struck 6 fours and 2 sixes in his score of 47. The innings ended on 161 with the wicket of Lockyer with Foreman 9 not out.
Crown Taverners took 23 points to Easton’s 9.
Share via
FacebookTwitter
https://www.emwcc.com/teams/81
Recent news