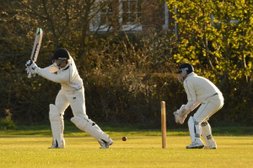 E&MWCC trounce Castaways as top three batsmen retire on 50 and bowling holds side back to 53 as E&MWCC win by 138 runs.

A humid evening at KG5 in Winchester as captain Andy Dickety steps out into the middle. He wins the toss and elects to bat sending Ben Stanbrook and Jordon Banks out to bat. Stanbrook and Banks are kept quiet in the first two but soon start to build momentum. Stanbrook smashed 50 in no time at all and retired after batting well. Adam Kite stepped out to bat and quickly started to accumulate runs. Banks retired on 50 after scratching around in his early overs. Kite retired soon after, surviving two catching opportunities continued to dominate down the ground. Zac Mitchell and Sam Dickety batted well, steering E&MWCC to 191 from 18 overs.

Adam Carrick and Zac Mitchell opened up for E&MWCC, Carrick took an early wicket as he made the ball talk as Castaways struggled to deal with his extra pace. Rachel Carrick and Ethan Brackstone provided solid support as they ground down the Castaway middle order leaving Sam Dickety to mop up the tail. A confidence boost for certain ailing first team batsmen and a chance for club morale to build further on recent successes for all sides.