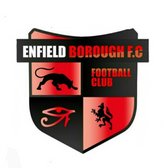 Enfield Borough bowed out of the Middlesex Charity Cup in disappointing style on Tuesday evening when they were well beaten by Spelthorne Sports by four goals to nil. Their opponents do play one level above Borough, but results in previous seasons have shown that this is not an insurmountable obstacle for “The Panthers”.

This match ends a run of three consecutive away games in six days which has proved to be a selection nightmare for the Borough management team. Missing nine first team regulars for a variety of reasons, twenty one different players have appeared in these matches, seven of whom have been making their first appearances for the club. At Spelthorne there was a debut for Nathan Henry while Mason Beason was handed his first start. Despite their problems, Borough stated brightly. Bruno Tavares was played in by Beason, but having created some space the striker dragged his shot wide. The hosts countered and Jamil Shallo saved well with his legs from Sekani McCalmon. A Billy Frost snapshot did not trouble Shallo, but Beason caused panic in the home defence when he harried Graeme Edwards into under hitting a pass back to keeper Jack Gannon. Beason got to the ball before Gannon but with defenders getting back behind the ball, he pulled his shot wide. Borough were fortunate when Josh Nyero laid the ball into the path of Lewis Flatman who beat Shallo only to see the ball strike the post and rebound to safety. Henry’s shot on the turn which was straight at Gannon rounded off an eventful opening ten minutes.

Shallo saved from Flatman at the foot of his right hand post, but the forward was not to be denied and after a quarter of an hour he connected with a right wing cross and directed the ball into the net off the foot of the post. The tempo slowed as the half progressed but both teams were still creating chances. A sweeping move by McCalmon, Nat Mensah and Flatman ended with the latter shooting from close in, but Shallo produced a fine point blank save. Borough responded when a Leonardo Pedro corner was only cleared as far as Frank Chandler on the edge of the penalty box. Borough’s captain worked the ball onto his left foot and fired the ball narrowly over the bar. Joe Dyett header was comfortably dealt with by Shallo, but he had to furiously back pedal when Flatman’s attempted chip was just too high. Borough’s keeper used his legs again to thwart Mensah while Jean-Paul Moke deflected Flatman’s shot wide. Borough ended the half well when a flowing move involving Bruno Tavares, Beason and Pedro ended with Henry’s shot being well held by Gannon and soon after Tavares got his head to Khalid Al Saud’s free kick but was unable to direct the ball on target.

In contrast to the first half, the second period opened at a leisurely pace and sensing the need to liven things up, Borough brought on striker Guiseppe Delgaudio for full back Endrit Reqica. But it was Spelthorne who increased their lead after fifty eight minutes. Mohammed Konte was caught in possession leaving Borough stretched in defence and when Frost chipped to the far post Flatman was unmarked to net with a cushioned volley. Shallo produced a fine tip over from Chris Martin-Thomas after the right back joined the attack before Konte was replaced by Qais Muhammad. In a rare chance for the visitors Pedro knocked down Al Saud’s free kick, but Delgaudio’s shot on the turn was blocked. Borough’s final throw of the dice was to send on Issa Sidibe in place of Beason, but with so many now committed to attack, gaps were being left at the back. This was cruelly exposed when Martin-Thomas clipped the ball over Borough’s back line for Mensah to run onto. He got there just before the onrushing Shallo and having poked the ball past the keeper was able to tuck it into the unguarded net.

After rescuing Borough on so many occasions, Shallo then pulled off the save of the night to deny substitute Sam Blakeborough. Having been set up by Martin-Thomas and McCalmon, Blakeborough produced an excellent curling shot that seemed destined for the top corner of the net until Shallo managed to stretch out his right arm to tip it over. But Blakeborough soon got his revenge. With seven minutes remaining Nyero took advantage of a lucky rebound and drove into the box only to be sent tumbling by Chandler. The referee pointed to the spot and though Shallo got his fingertips to Blakeborough’s well hit shot, he could not keep the ball out of the net.

It was a shell-shocked Shaun Reece that spoke after the match. “We have had so many issues getting a team out in the last week. Even tonight we get a late call that one of the lads has problems with public transport and can’t get to the ground, so we play someone who would not have been picked and end up one short on the bench. It has been a nightmare and it is something that will be addressed urgently. But credit to Jamil tonight, he kept the score from being embarrassing.”

Borough will be grateful of a weekend off and they return to action on November 2nd with a home match against Ampthill Town. Kick off at the Maurice Rebak Stadium is 3pm.
Team; Shallo, Reqica (Delgaudio), Konte (Muhammad), Chandler, Al Saud, Moke, Henry, Beason (Sidibe), Pedro, Tavares, Stevens