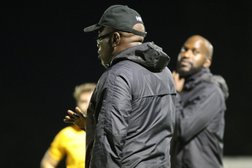 Enfield Borough’s season. They thought it was all over – it is now!!

Borough’s return to action was brief, typically entertaining but ultimately fruitless as they were knocked out of the Middlesex Premier Cup by FC Deportivo Galicia at Bedfont by the odd goal in seven on Wednesday evening. A spirited second-half comeback was not quite enough for Enfield who were made to pay for a poor opening forty-five minutes.

Borough had originally intended to use the competition to give match time to a number of squad players who had been twiddling their thumbs on the sidelines, but as there had been no matches since October 27th, the revised idea was to field a very strong team. But these plans went out the window before kick-off when a car carrying three players broke down and with uncertainty over when the minicab bringing them would arrive, Enfield’s management team were forced to name them amongst the substitutes. However it was still a very recognisable collection of players who took to the field to start the match. The early stages were quite even but the team creating the chances were the hosts. Arkaiz Ruiz brought the ball under control, side stepped Gideon Sarpong and drew a save from Borough’s keeper Dragos Stefanoaica and shortly after he had to do likewise to deny Alvaro Castano the opening goal. From the resulting corner, Borough broke quickly out of defence and Micah Jackson’s raking pass picked out Richard Ennin, but the striker pulled his shot wide of the near post. Minutes later Ennin had another chance but this time shot wide of the far post when well placed.

The deadlock was broken after fifteen minutes. Anton Fernandez cut inside Gavin Hinds-Cadette and fired in a shot which struck the foot of Stefanoaica’s right-hand post, the rebound falling perfectly for Ruiz who netted with ease. The lead was doubled two minutes later when a free kick was conceded centrally some twenty-five yards from goal. Enfield employed the “draught excluder” method of having a player lay on the floor behind the wall to prevent a low shot, but what they needed was someone hovering four feet off the ground as the ball was driven straight at and through the wall by Fernandez, the deflection that it took en-route sending the ball past a helpless Stefanoaica. Borough had gone into the match without any warm-up games whereas Deportivo had played one friendly. Whether this had any bearing is difficult to tell but the hosts were showing more determination in the 50/50 challenges as their confidence grew while their pacy and mobile forwards swarmed all over Borough’s defence, drawing them out of position and never allowing them to settle on the ball. There were further chances to increase their advantage, but either the assistant referee’s flag or poor first touch kept the score down. Enfield rarely threatened in attack – Alissana Queta saw his shot blocked, Jackson failed to hit the target when found by Ennin while Blessing Tshibikubla’s effort was deflected for a corner. Meanwhile at the back it was all hands to the pump with players getting their bodies in the way of shots while Stefanoaica produced saves to deny Fernandez and Castano. Enfield had what seemed a reasonable shout for a penalty when Ennin was brought down on the edge of the box but the referee waved play on. With the last kick of the half, Deportivo increased their advantage as the ball was worked from left to right across the Borough penalty box until it reached Fernandez who drove low past Stefanoaica.

At the interval Bruno Tavares and Sevdar Bokciu were introduced for Queta and Kwaku Aning and the impact was immediate. Tavares broke through the Deportivo back line and rounded the keeper only to see the flag raised for a marginal offside. But seven minutes into the second half he was slipped through again and this time he fired the ball low past Manuel Lamas from a tight angle. The striker was at the centre of the action and seven minutes later he was fouled midway inside the Deportivo half. Huseyin Ombasii lofted a hopeful ball into the box which seemed easy for the keeper to deal with but Lamas allowed the ball to bounce from his grasp and Tavares was on the spot to tap into the empty net. Now in search of his hat-trick, Tavares hit a shot on the turn which Lamas gathered at the foot of his left-hand post but he was soon put clear again by Tshibikubla only for Lamas to save with his feet, the ball rebounding to Ennin whose goalbound header was cleared by a covering defender.

Hinds-Cadette limped off to be replaced by Ayuub Ali which necessitated a switch around in the defence, but Borough were well in command with Bokciu, making his competitive debut for the club, playing with confidence at the back while always making himself available for the pass. Stefanoaica made his first contribution of the half when he dived at the feet of Castano who had broken through while Ruiz drove a shot across the face of goal and a cross from substitute Zaid Ouaret landed on the roof of the net. Despite this spell of pressure from the hosts, it was still a shock when they scored again with less than ten minutes remaining. A lofted pass from halfway was brought under control by Ruiz and he slotted the ball wide of Stefanoaica and into the net. But Borough were not finished yet and three minutes later Deportivo lost concentration at a short corner by Jackson and Jean-Paul Antwi which saw the latter drive the ball into the goalmouth where an unmarked Ennin prodded it home. The hosts were back on the attack in the closing minutes as Stefanoaica kept out Francisco Naut, Ruiz and Juan Devia in quick succession while the final chance of the game fell to Tavares after an excellent through ball by Sarpong, but the striker was knocked off balance by his marker and he shot straight at Lamas.

The final account of the season shows that Enfield Borough played just nine competitive games during 2020-21 which produced a grand total of fifty two goals, twenty six scored, twenty six conceded. A club record win of 10-0 was recorded against Hillingdon Borough while there was penalty shootout heartbreak in the FA Vase at the hands of Hadley. Ultimately it all counted for very little as the league campaign was declared null and void while matters on a global scale put concerns about football into their true perspective. But it was fun and hopefully we will all be back again later in the year when Borough embark on their sixth season of senior non-league football.