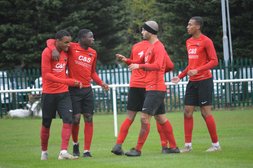 Having looked comfortable for the opening thirty five minutes of their match at Buckingham Athletic, fifteen minutes of defensive madness either side of half-time saw Enfield Borough condemned to their second heavy defeat of the week on Saturday. They did find themselves on the wrong end of a couple of questionable refereeing decisions, but that cannot disguise the fact that once Buckingham drew level, Borough pressed the self-destruct button with alarming consequences.

Tyler Christian made his debut for Borough and Blessing Tshibikubla was restored to the starting line-up in place of Gideon Sarpong and Elliott Harris. In a quiet opening spell, the first chance came after four minutes when a Buckingham corner dropped into the Borough goalmouth, but the ball popped up into keeper Dragos Stefanoaica’s grateful hands. Tom Brazier was threatening for the hosts with a low driven cross that Stefanoaica did well to cut out while seconds later he was inches away from connecting with a centre. In response Christian’s sent a diagonal pass to Tshibikubla who laid the ball off to Richard Ennin whose shot flew wide of the target. Christian was making a favourable impression in midfield and he played a nice pass into the path of Bruno Tavares, but the striker dragged his shot across the goal. Tavares and Jean-Paul Antwi combined to set up Tshibikubla whose shot was blocked and soon after Nick Bennion in the Buckingham goal charged outside his area to tackle both Tavares and Tshibikubla in quick succession. But from the resulting throw in, Borough took the lead. The ball was lobbed into the box, poor control by a home defender saw it land at the feet of Tavares who instantly chipped the ball over Bennion and into the empty net.
Having taken the lead, Borough had a chance to increase their advantage as Carlito Montana’s cross seemed destined for Ennin at the far post until a last ditch interception by Enock Sare. But otherwise Borough did not threaten to double their lead despite looking very much at ease. On thirty three minutes, a warning of what was soon to follow came when Jeremiah Adams got a toe to Owen James’ dink into the goalmouth to divert the ball past Stefanoaica, but the flag was raised for offside. Just two minutes later a free kick was lofted into Borough’s penalty box, Adams provided the flick on and James sneaked in round the back to prod the ball past Stefanoaica. Frank Chandler attempted to clear the ball off the goal line, but failed to make any contact with it. Sixty seconds later an over hit cross seemed to be going harmlessly out of play but as Gavin Hinds-Cadette and Kyle Faulkner closed in on the ball, Faulkner fell to the ground and the referee awarded a penalty. If there was any contact at all, it was very minimal, but the decision had been made. Even then there was a chance of redemption as Stefanoaica produced an excellent save diving low to his left, yet Borough’s players failed to react to the rebound and Faulkner easily netted at the second attempt. Three minutes later Antwi was penalised for handball on the edge of the D. The ball was hit at him from point blank range and the decision was harsh but probably to be expected in view of those given recently in the Premier League. Buckingham captain Carl Tappin extracted full punishment with a classy free kick that flew past the outstretched arms of Stefanoaica and into the net. The keeper then produced a great save from an Adams free kick while Brazier’s shot from an angle blazed well over as the hosts dominated the closing stages of the half.

Any hopes of a second half recovery were extinguished inside the first minute. Trying to punch clear a corner, Stefanoaica made poor contact, the ball dropped down, struck Chandler on the back of his legs and fell perfectly for James who scored from close range. Now in complete control, Buckingham looked likely to score every time they got the ball and Faulkner had the next opportunity, but trying to be too precise in his finish, he placed his shot just wide of the left hand post. On fifty one minutes the final nail was hammered into Borough’s coffin. A pass from midfield found Adams in space, Stefanoaica left his goal to challenge the striker but missed the ball and Adams tapped it into the empty net to complete his hat-trick. Stefanoaica produced an outstanding reaction save to keep out Faulkner’s unopposed header from a corner before Borough replaced Ayuub Ali with Sarpong. Borough’s stopper was in action again when his poor clearance fell for Brazier, but the keeper redeemed himself by saving the resulting shot, Chandler blocking the follow up effort from Chris Parr.

Borough brought on Alassana Queta and Dawid Nikolaj for Tshibikubla and Hinds-Cadette, but within seconds of coming on to the pitch, Queta was sent to the sin bin for ten minutes which did nothing to help Borough’s cause. The onslaught that Enfield had faced eased as the outcome of the match had long since been decided. Both sides could have added to the score and Stefanoaica produced saves from Tappin and Faulkner (twice) while substitute Keith Mupfururirwa fired wildly over. As for Borough, they could have gained a consolation goal when Antwi crossed to Montana at the far post. Despite a poor first touch, Montana got in a shot which was charged down. Tavares’ near post ball was stabbed narrowly wide by Christian and just before the final whistle Queta’s shot on the turn missed the target.

“We must be braver in our play” said joint manager Shaun Reece post-match. “As with the Bedford game, we start to launch the ball down the pitch rather retaining possession by playing it through the midfield. We have creative players in the middle of the park who can cause the opposition problems, but we are bypassing them and not making the most of their talents. Giving away the ball so easily then puts the pressure back onto our defence and the individual mistakes that we have been making of late are a symptom of that. Any advantage that we have worked so hard to gain is handed straight back to our opponents.”

Borough will have to do much better when they face Hadley from the Essex Senior League if they hope to progress in the F.A Vase next Saturday. Kick off at Arkley is 3pm.
Team; Stefanoaica, Hinds-Cadette (Nikolaj), Antwi, Christian, Chandler, Ali (Sarpong), Montana, Ombasii, Tavares, Ennin, Tshibikubla (Queta)