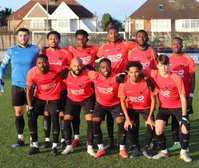 Enfield Borough reached the halfway mark in their league campaign with a well-deserved 2-0 home win over Bedfont & Feltham on Saturday. It was their first win since October 30th and was not one of their more spectacular performances but it was nevertheless one that delighted the club's management.

Having made numerous changes when the team exited the Middlesex Premier Cup in their last fixture, it was a more familiar line up that took to the field. Only Brad Roberts, Malachi Soile and Darral Wopara retained their place in the staring eleven. Borough had the first chance of the match when a Craig Nelson free-kick looped over the head of the last Bedfont defender to Simon Offei but the striker appeared shocked that the ball reached him and the chance went begging. The visitors were fortunate not to be reduced to ten men as early as the sixth minute when visiting keeper Sam Bersey came well outside his box to bring down the rampaging Richard Ennin, but the referee felt a yellow card was sufficient punishment. Korede Akande tested Bersey with a snapshot that the keeper pushed aside before Borough created a great chance. Gavin Hinds-Cadette started his run inside his own half and despite losing and re-gaining possession twice he managed to work his way into the penalty box where he was brought down. Fresh from his recent successes from the penalty spot, Richard Ennin saw his kick saved by Bersey’s legs.

The hosts kept up a relentless assault on the Bedfont’s goal throughout the first-half. A nice move along the edge of the penalty box ended with Offei’s centre which Bersey flicked away from Ennin’s head while Akande’s cross was just too high for Offei. Having made space for a shot, Offei’s attempt was too strong for Bersey to hold and Mussunda fired the rebound over the bar. Against the run of play, Bedfont nearly opened the scoring when a flighted cross by Cyril Ocansey drifted over the head of keeper Dragos Stefanoaica and hit the crossbar. The ball dropped into the goalmouth to Jon-Jo Bates who somehow blazed over the bar from a matter of feet. Soon after an off-balance Akande failed to hit the target and Ennin showed great determination to beat three defenders before being thwarted as Bersey dived at his feet. The loose ball ran to Mussunda whose goalbound shot was blocked by a covering defender.

Ocansey had the first chance of the second-half for the visitors but he made poor contact with his head while the half-time interval had done nothing to affect Ennin’s determination as he muscled his way between two defenders only to be brought down yet the referee waved away any appeals for another penalty. At this point Enfield drifted out of the match as an attacking force and Bedfont were the architects of the few chances that were created over the next thirty minutes. Luckily for Enfield most of these were carelessly wasted though Stefanoaica had to make two attempts to gather Ryan Lloyd’s flick at the foot of his left hand post.

Borough brought on Rinidie Lokilo and Marc Valderrama in an attempt to liven things up and the changes worked with eight minutes left on the clock. Offei found himself in space on the right wing and headed towards the byeline. His cross evaded Ennin but Lokilo was perfectly placed at the far post to net. Having been the source of the first goal, Offei repeated the feat five minutes later. This time Valderrama was on the end of the cross and while his shot was blocked, the ball fell kindly to Ennin who calmly finished. There was still time for Roberts to try his luck from thirty yards with a shot that flew narrowly wide while Bersey parried from Offei after good build up work by Ennin and Lokilo.

This was only Borough’s second clean sheet of the season and was something that delighted manager Anthony McNamee. “That was a very efficient performance today. The team spirit is getting better by the week and the boys are starting to trust one another on the pitch. They are enjoying playing together and that is reflected in displays like this. We looked more solid at the back, but we cannot afford to get over confident as we have some very difficult games on the horizon.”

The first of these comes on Tuesday evening (December 7th) when Enfield entertain Rayners Lane at the Maurice Rebak Stadium, kick off 7.45pm.