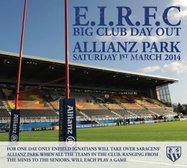 1. Club to Take Over Allianz Park for a Day!

ENFIELD IGNATIANS will engage in the biggest and most exciting project in its history when all the teams in the club, ranging from the minis to the seniors, will each play a game at Saracens' Allianz Park on Saturday, March 1st in 2014, writes Jonathan Landi.

The climax of the 12 hour rugbyathon, otherwise known as the Big Club Day out, will be the floodlit London Two North-East league clash between the Ignatians' first team and Saffron Walden at 7.30pm.

A main sponsor for the event, Fairview New Homes, has already been secured and, although it isn't designed to be a money making exercise, it should certainly help raise the profile as the club seeks to engage with the media in the form of the printed press, radio and television.

Harold Pritchard, the Ignatians' youth chairman and driving force behind the project, said: "This will mean that every single of the 500 players in the club, ranging from four to 64, will get a game against different opposition.

"This will be the largest event our club has ever organised and it's a massive exercise in logistics. For example, in order to meet the demands of a demanding schedule, the first game will kick-off at 9.15am which will be the prelude to 12 hours back-to-back rugby.

"One of the fundamentals is that each game will be readily supported by family, friends and supporters, and one of the stipulations, at least as far as the youth opposition are concerned, is that they need to bring at least two coach loads of 100 supporters to the game.

"Key to the success of day will, of course, be the concessions available for supporters, including the bar. Some of the other items that we would look to include are the big screens to cover the matches, and the possibility of introducing an announcer."

Ignatians are no strangers to project Allianz Park. In Feburary, they staged two youth games there on a Sunday, including a colts' fixture, and at ten days notice, were able to lay-on five coaches to the games at the home of the Premiership giants.

There's no doubting that this is an altogether bigger and more substantial challenge. However, it's a very exciting one and one that Ignatians deem well worth pursuing.