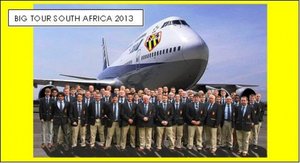 The Summer of 2013 was one to remember for Enfield Ignatians as the Club embarked on its biggest and, probably, most ambitious tour ever. The destination chosen was South Africa and the touring party of 63, including a fair amount of graduates from the Youth Section, thoroughly enjoyed the experience..

Christened Big Tour for obvious reasons, the six match itinerary yielded two wins from six games, with the highlights being the senior team's 22-12 win over Kraainfontein followed by the colts' 19-10 victory over Durbanville.

Club president Martin Baker said: "As one of senior players commented 'South Africa was everything we expected and more.' The touring party had a great time and the we played some really tough opposition, as some of the sides feed into the top South African sides, in some great facilities.

"One of the opposition centres particularly caught the eye. He was a pastmaster at off-loading out of the tackle and I've no doubt that he would walk into any of the first teams in our league even at the tender age of 35!"

"One area which was particularly eye-opening was how refereeing interpretations differ in the South Hemisphere. In one of our games, the policing of the ruck area was liberal to say the least, as players were repeatedly coming off their feet and not getting pinged.

"We've been able as a group to visit some great places such as Table Mountain and Robben Island and, beyond the bare bones of the results, it proved a great bonding exercise and was particularly successful in bringing the senior and junior sections of the club together.

"There were opportunities for tour members to do their own things but this was never really an option, as the group stayed together practically the whole time.

"There were also some excellent performances on the fields. Standouts included Tom Killey, David Gear (Best Youth Player) and former colts Aaron Doe and Luke Stack. It was certainly a tour to remember."