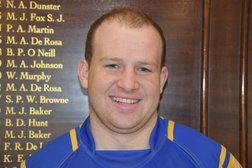 BEN MILLS, a young player very much on the up, has reaped the rewards of a stellar season by being crowned the 2018-19 Enfield Ignatians Players' Player of the Season - an award which, as the name suggests, is determined by the first team squad members.

Having also represented Hertfordshire at U20s level last season, the hooker was a deserving recipient of the accolade following a string of standout performances at London Two North-West level.

Head coach Shane Manning said: “Ben always gives his all in every game and he leads by example. He is always willing to run the ball, or make a big tackle, and has a lot of respect from the guys.”

Charlie Hoy (coach’s player of the season) and Jack O’Toole (most improved) were the other award winners at first team level.

The coach added: “Jack O'Toole made the step up from colts to seniors, and by the middle of the season, had established himself as a regular starter in the first team.

"Charlie Hoy has only been playing rugby for a few years {but] he did very well and was very consistent throughout the season.”

The award winners at second team level were Lucas Yoxall (players’ player) and Euan Renny (player of the year).

The third team award winners were Stanley Adepegba-Ogidan (player of the season), Jason Johnston (players’ player) and Daniel Redding (up and coming player).