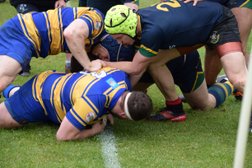 Promoted ENFIELD IGNATIANS have rightly regained their place in London Two North-West next season, and, as things stand, they can look forward to a 22 game league season (see below) as of 18 September, writes Jonathan Landi.

In other developments, the club has arranged pre-season friendlies for the first and second teams against Chelmsford on 4 September, and is actively seeking other warm up fixtures in the run-up to the league season.

At the time of writing, we are still awaiting the arrival of the Herts-Middlesex Merit Tables fixtures’ list, which is of primary concern to the second and third teams.

Meanwhile, our quest to appoint a head coach also continues and we will update the club once any progress has been made in this area.

A later than usual start to the rugby season, sees the blue and golds take on Ruislip at Donkey Lane on the above date, which leads up to the away fixture against Hampstead at the Heath Extension on September 25.

A busy October sees Ignatians face Old Streetonians, Old Priorians and Grasshoppers at home on October 2, 16 and 30 respectively, with the clash against Datchworth on 23 October being their only away fixture that month.

The blue and golds will twice be on their travels the following month when they take on Hemel Hempstead and Fullerians on the 6 and 27 November, which are sandwiched between the home clash against Hackney on 13 November.

The run-up to Christmas sees Ignatians square up to HAC (at home on 4 December) and Letchworth (away on December 11th), before beginning their second round of fixtures on December 18 at home to Hampstead.

The New Year ushers in away fixtures against Old Streetonians (8 January) and Old Priorians (15 January) and Grasshoppers (January 28), and we will be entertaining Datchworth on 22 January.

We have a lighter load in February which is marked by successive home and away fixtures with Hemel Hempstead and Hackney on February 12 and 19.

The run-in to the campaign is marked by games against Fullerians (home), HAC (away) and Letchworth (home) on March 5, 12 and 26, before concluding away to Ruislip on 2 April.

Although the caveat is that the above time table is clearly linked to the developments in the current health crisis. So watch this space.