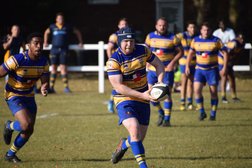 ENFIELD IGNATIANS were back on song after a disappointing start to their London Three North-West campaign as Kilburn Cosmos were firmly put to the sword 33-14 in the bonus point win at Donkey Lane.

Head coach Shane Manning said: “It was a much better performance compared to last week [than Old Streetonians}, and everyone seemed to know their roles. We played the game in the right areas of the field. Although there is still lots to improve on and the side is nowhere near where I want it to be.

“Ben Mills (pictured) had an outstanding game and was the Man of the Match. He was literally here, there and everywhere. He also located his jumpers in the lineout and successfully covered in the ‘backrow’ when required.”

Playing up the slope in the first period, the blue and golds began confidently and they literally had the wind in the sails after serenely galloping into a 13-7 half-time lead. Captain Jake Bates was a key catalyst and, after regathering his own chip over the top, the in-form fly-half neatly set up supporting centre Lucas Yoxall for the first of the blue and golds’ four tries.

The fly-half further turned the screw after adding the conversion and two sweetly struck penalties after the visitors were successively punished for coming off their feet and off-side.

In between the second Bates’ strike, Kilburn replied via their lively fly-half who dummied his way through and rounded fullback Johnny Dixon, before adding the conversion.

Granted better finishing, a far more composed blue and golds side compared to the Old Streetonians’ game, could even have collected a couple more scores before the break. However, more pertinently, from the initial minutes when their dominant pack rumbled up-field fully 40 metres, they set out their stall and were firmly the masters of their own destiny.

Even granted a couple of untimely injuries to Charlie Hoy and Luke Stack early in the second-half, the blue and golds continued to ratchet up the pressure and the points steadily began to flow.

Jack O’Toole, the replacement scrum-half, finished off some excellent work of his own creation after some well-executed link play involving Dom Nott and Ryan Browne before collecting the return scoring pass.

Man of the Match Ben Mills, a constant threat, was a key catalyst in the build-up to the third try which saw the blue and golds carve a big overlap on the left before Shane Manning released Ryan Browne.

Centre Michael Hall made some fine linebreaks and, after being bought down close to the line, supporting flanker, Liam Dunne, was on hand to finish off as the hosts sealed the bonus point win.

Jake Bates added two conversions before nailing a third penalty after Kilburn again came off their feet. He could even have scored a try himself but before dropping the ball over the line.

Reviving in the dying minutes, Kilburn claimed a second try after their scrum-half hared clean through, but by then it was all over bar the shouting.

There were lots of positives and not least the sterling contributions of the youngsters such as Euan Renny and Jack O’Toole, with the latter replacing scrum-half George Cox on the half-hour mark.

The three Enfield finishers were committed to the fray early and, namely on the half-hour mark. However, this was done for tactical reasons and was very much part of the game plan.Nevertheless, some creative thinking was called for after the Hoy and Stack injuries, which meant recalls for Alex McCall and Carl Asare-Anderson. Not that the side ever suffered.

Ignatians are away to Old Merchant Taylors’ on Saturday (Sept 28).