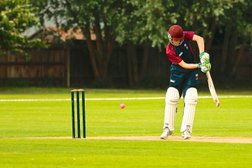 In the later game of week 2 the crowd saw the Wolverines, the leading team from week 1, humbled by the Leopards who bowled them out for 45 when chasing a steadily scored 100-4. In the first game of the evening it went down to the wire with the Wolves hitting the two runs they needed to win off the final ball of their innings chasing 83 scored by the Wildcats.

Most Valuable Player
After two weeks the two most valuable players are Luca Murzell and Jack Underwood, both with ratings of 3.2, followed by Jamie Baswden on 3.0 with Dan barker, Forest Williams chasing them up on 2.9.

Week 3 games
This week we will see bottom team Wildcats take on third place Jaguars in the first game of the evening and in the second game the fourth and fifth places teams, Wolves & Panthers, take each other on in a tussle to move up the table.