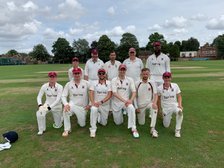 Following last weeks surprise defeat, the 1XI were looking to maintain their spot in the promotion places with a win against Purley. The Es batted first and scored 243 from 46 overs in a match slightly shorted by rain. Chisoro bagged his second 100 of the season and Zeb chipping in with 59. In response Purley struggled initially and found themselves at 115-7. However an 8th wicket partnership of 57 saw Purley creep closer to the target before eventually being bowled out for 194 in the 44th over. Somerford picking up 3-48 from 10 and Dunn 2-17 off 9.

The 2XI took on Cranleigh at home. With some availability issues this fixture was always going to be a challenge . The Es bowled first and kept the rate under wraps for the first half of the innings. However with wickets in hand Cranleigh were able to play some shots later in the innings, exploiting the small boundary well, and finished on a hefty total of 293 from their 50 overs. Epsom battled valiantly in their response but facing a very strong Cranleigh attack (with plenty of 1XI experience), they were unable to make any headway and were dismissed for just 114. Jones the only batsmen showing any real fluency for his 27.

The 3XI took on Old Emmanuel at Alex Rec. The youthful 3XI batted first and made 115 from their 45 overs. Shahid top scoring with 29. The Es bowled well in response with good opening spells from Eliot Baker and Ben Berry but with not enough runs on the board it would always be challenging and the opposition chased down the total in the 30th over. Shahid picking up 3-18 in an excellent individual performance

On Sunday an Epsom XI took on a Chairman's XI guest staring former Zimbabwe international star Charles Coventry. The Chairman's men batted first and 206 with Jon Wileman, Beswick and Coventry all batting nicely and picking up runs and good spells from James Chenery and Eliot Baker and Andrew Minhinnick. After a long and delicious tea the chase commenced. A good opening stand from Nickels and Allen set the platform despite good opening spells from Alex Minhinnick and Harvey Dennis. Kay also chipped in some runs and the victory looked secure. A mid order wobble left batsmen scrambling to pad up and in the end it was left to Tuck to play a delightful reverse lap to secure the victory.

Pictured are the victorious Epsom team. Many thanks to everyone involved for putting on a an excellent day out.