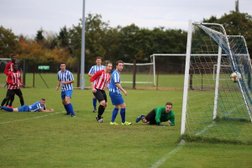 Saturday's ESL Round Up

Premier Division
Barking 3 Burnham Ramblers 2
The Blues bounced back from their midweek trouncing at Clapton to take the points at home to Burnham Ramblers thanks to an own goal, Joe Pearman and Brad Ling strikes. The visitors may have left empty handed but will to heart from the fact they battled with ten men for 75 minutes. The Blues are 8th whilst Burnham are now 13th.

Basildon United 7 Greenhouse Sports 2
The Bees demolished Greenhouse Sports at the Hive to move into 3rd spot in the league. Mtyanda, Hunter, Brad Warner and Hunter again saw the hosts four goals up in 18 minutes before an own goal gave Greenhouse a goal back before the half time break. Basildon continued their dominance in the second half adding further goals thanks to a rocket of a shot from Mtyanda, a Paul shave header and finally seeing Warner round the keeper to make it seven and although Greenhouse got a second back they were totally outclassed today and drop to third from bottom although are six points ahead of the bottom two.

Enfield 1893 0 Sawbridgeworth Town 4
Neil Blackburn is still awaiting his first win as Enfield manager after they were heavily beaten at home by Sawbridgeworth Town. The visitors struck twice in each half, 17 and 37 minutes in the first half and 62 and 90 minutes in the second half, to stroll to their ninth league win of the season. The win also took them level with leaders Bowers & Pitsea at the top of the league and are only second by one goal in goal difference. Enfield remain bottom with just a point level with Waltham Forest.

FC Romania 2 Bowers & Pitsea 2
Bowers remain top only on goal difference after they were held to a draw at Theobalds Lane against FC Romania. Lewis Manor slotted Bowers into a 1-0 lead but then saw the hosts equalise on the stroke of half time and then the hosts grabbed the lead but then saw Vinny Durrant curl in a free kick to make sure Rob Smalls.side left with a point. The Romanians remain 6th after this draw.

Hullbridge Sports 4 Clapton 4
The Tons came back from 4-1 down with under twenty minutes to go to draw 4-4 and take an unlikely point from an incredible match. It looked good for the out of form hosts, who had lost their three previous games, when Luke Hornsley and Kurtis Clarke had them two goals up in 18 minutes. Clapton responded with a penalty just past the half hour mark but Sports regained their two goal cushion six minutes before half time through Luke Hornsley's second of the game. When Rory Clark stuck the hosts 4-1 ahead on 67 minutes you would of thought they had the points in the bag. However the Tons didn't give up and grabbed goals back on 72 minutes and then 87 minutes, the second one a penalty, to see Sports clinging on. They could not hold out as Clapton levelled in stoppage time to gain an unlikely draw. The Tons do drop to 7th though whilst Hullbridge fall out of the top ten and are now 11th.

London Bari 2 Southend Manor 0
One goal in each half was enough for Bari to record back to back home wins in the league and two clean sheets to boot as they defeated Southend Manor at The Old Spotted Dog Ground this afternoon. Bari are now up to 9th after their latest triumph whilst defeat for Manor sees them slip to 14th.

Newham 1 Stansted 2
Late second half goals from Olly Fortune & Dave Ratcliffe sealed a hard thought victory for Stansted at Chadfields against a very unfortunate Newham side. The visitors led through
Fortune and then saw Newham reduced to ten men before doubling their lead through Ratcliffe and although Newham grabbed one back they could not force an equaliser and sees the hosts in 17th whilst Stansted are up to 12th.

Takeley 1 Sporting Bengal United 1
The points were shared at Station Road as Takeley and Sporting Bengal United shared a 1-1 draw in a game where the visitors played 70 minutes with ten men after Tunde was sent off early on. Takeley though could not capitalise on their numerical advantage and stay down in 18th although will be pleased to have halted a run of defeats whilst Sporting drop to 10th.

Tower Hamlets 2 Eton Manor 0
Hamlets finally grabbed the win there football deserves by defeating Eton Manor at Mile End. The hosts led two minutes before the break thanks to an own goal and then they sealed the points three minutes into stoppage time when Nasser Bello scored their second goal. Hamlets move up to 15th whilst Manor drop to 16th.

Waltham Forest 1 Ilford 2
Ilford left the Matchday Centre in Walthamstow with all three points as they beat Waltham Forest to move into 4th place. Forest keeper Hunt, who had recovered from last week's injury against local rivals Wadham Lodge, thwarted former Pennant front man Chris Stevens who made the most of a fortunate bounce to get through. Tulloch then forced a chance for the hosts but hit straight at the keeper before play switched straight up the other end and Hunt made another good block. However the visitors did lead when Stevens punished Forest, peeling off the back line and slotting past Hunt but Forest almost got back into the game when Mahmoud got through but the Ilford keeper pounced on the ball. But then my word, Akbayrak scored an absolutely ridiculous goal from about 40 yards out, dropping a shoulder and smashing one into the top corner and see the sides go into the half level. However as is with Forest's season to date and after dominating they fell behind again when Hunt came out to clear but missed the ball allowing Carl Mullings to roll the ball home. Thereafter Ilford missed a host of chances to finish their opponents off but they couldn't do this although they managed to take the points which sees Forest second bottom with just one point from twelve games.