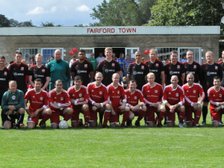 The game saw a host of former Swindon regulars turn out for the game including David Duke, Ian Woan, Jerel Ifil, Paul Bodin and Alan McLoughlin.

Current Swindon boss Paolo Di Canio also played 90 minutes on a sun-drenched afternoon in Gloucestershire as the Robins side took on a spirited Fairford side.

Fairford went ahead with an own goal before Paolo Di Canio levelled the scoring with a neat run and finish. Former Swindon, Yeovil and Hereford midfielder Jamie Pitman put his side ahead with a header before the break before an impressive finish from Fairford's Rob Simpson levelled the game at 2-2.

Second half goals from Andy Caton and David Duke gave Swindon the advantage in front of a crowd of just under 300, who enjoyed a fun afternoon of football on a superb Cinder Lane surface.