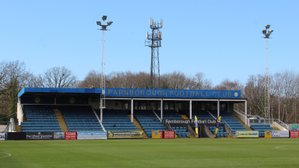 Over the last few years the Easy As HGV Stadium has undergone – and is undergoing – a major transformation. The tired old stands have either gone or been completely refurbished.

A brand-new stand at the Prospect Road End (PRE – top of the picture above) has been constructed and has increase the capacity by over 1300.

On the Main Stand side (right) there is a small open terrace near the turnstiles and the club shop, this leads to the front of the main stand, which has seating for 648 people. The opposite side of the Main Stand is another small terrace called the Chairman’s Mound (498) traditional home of the PRE faithful.

The Moor Road End (MRE) terrace (which is used by the away supporters during segregated matches) is covered with a capacity of 1,980. The East Stand is completely cover with 1064 seats and a family enclosure.

The Club Car Park has also been relayed during the last few years.

In 2016, the Easy As HGV Stadium was awarded a Category B Grading.