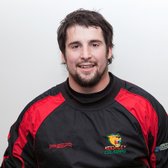 The unique bond of Rugby League

Thoughts are with Dannys Family & Friends from all at Farnley Falcons

The RFL has confirmed that Keighley Cougars player Danny Jones passed away on Sunday May 3rd after suffering a suspected cardiac arrest during a League 1 match against London Skolars.

He leaves behind a wife and 5 month old twins.

Jones who was 29, collapsed after being replaced early in the match and was treated by the match doctor and paramedics at the ground before being taken to the Royal Free Hospital. Despite extensive efforts to resuscitate him, Jones passed away at the hospital.

RFL Chief Operating Officer Ralph Rimmer stated "It is always devastating when someone so young dies in these circumstances. Danny was a popular and talented Rugby League player, having played at the highest level with the Wales National team and playing over 12 seasons for Keighley Cougars and Halifax.