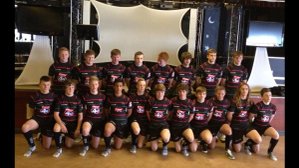 The score does not reflect the game!!

Having not met Stanley Rangers for some time, we had a sneak preview of how they played when they played Blackbrook in the cup.

Having not met Stanley Rangers for some time, we had a sneak preview of how they played when they played Blackbrook in the cup. So we new what to exspect for them.

Both sides started the game with some fierce defence, Farnely doing the most of it forthe first 20 mins until a well worked try crashing over from a few metres out by Stanley (0-6).

That gave the farnley player a big wake up call,the forwards started the driving the ball up with strong runs from Liam Carr, James Page, jack Hepworth and Josh Foster, with the ball moving left to right it took a smart piece of play by Spencer Taylor to go over for a try (6-6.

With half time closing in and our forwards taking a battering james (broke a finger nail)!! and left the field unable to return liam carr banging his head (again), we were down to 1 and 1/2 subs but still looked strong, Stanley raised there game with some of the hardest running i've seen for a while eventually breaking our line from close range again, (6-10) half time.

The half time talk went well to build the lads up for a big second half against a strong wind we knew we had to pull someting special out to cause an upset against the Stanley Boys.

The second half started how the first had finnished with some strong runniing from the stanley forwards and outstanding deffence from farnley, we were forced to drop out on a couple occassions which eventually caused our defence to slip agian from close range stanley got another. (6-16)

This some would say caused the flood gates to open! I would say some small cracks to appear allowing stanley in for 2 more trys in the next ten miniutes. (6-28)

With 15 mins to go we set ourselves a target of not allowing anymore try's in, the Farnley boys up'd there work rate in deffence causing mistakes to appear, only for our handling in the wind, pass the advantage the other way. The defence from both sides were on top form causing all sorts of problems and with it a few injuries (i hope all are well) with the last 5 mins Farnley through the Kitchen sink at them but to no avail with the game ending 6-28.

it was a massive effort from both sets of players and supporters.