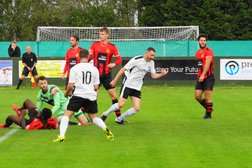 DEFENDER Joe Denny's birthday celebrations have continued into this week after he was named in KentOnline's team-of-the-week.

Denny marked his 24th birthday at the Aquatherm Stadium in style with the only goal in Town's 1-0 win over Whitehawk on Saturday.

The Lilywhites also won a penalty but that was missed by recent signing Eddie Allsopp after Dean Grant had been fouled.

Denny is joined in the side by SE Dons team-mate Ryan Palmer who scored the winner as Margate bounced back from last week's defeat at Bishop's Stortford with a 2-1 home victory against Brightlingsea Regent.

Cray Valley's Nathan Green and Zak Ansah, of Herne Bay, are among the other Isthmian South East players to make the grade.

Gillingham striker John Akinde is named in the side, too.

The team is managed by Adam Woodward who moved to the Southern Counties East summit after a fourth straight win.