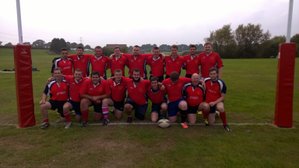 The game started brightly for Fawley when Alex MacKenzie-Grist playing his last game for the club kicked through and Luke Edinborough picked it up on the wing and ran 40 yards to touch down in the corner, following a successful conversion, it was 7 – 0. Ten minutes later, new signing Cornelius scored on the other wing following an inspired tap-on by Connor Lynch in the centre, again converted 14 – 0. A strong run at centre from Kyle Morant gave Cornelius his 2nd try under the posts, making it 21 – 0 and the game looked in the bag. But then a try fest of 3 from Basingstoke in the last 10 minutes of the 1st half from their No. 9 and No. 1 saw Fawley’s lead disappear and they turned around 21 – 28 down. Bad defence around the fringes was the reason and at half-time this was addressed and Fawley started the 2nd half well.

The next 20 minutes saw no scores, both teams had chances but defences held solid. Luke Edinborough went close with a break down the wing and kick on which just went dead and Basingstoke had a break-out which was stopped by a brilliant last ditch tackle by fullback Cornelius.

The deadlock was finally broken when Fawley had a line-out well won by Chris Crump who had dominated all game and Dave Owen forced his way over in the corner, the conversion was narrowly missed, making it 26 – 28. The next 10 minutes saw end to end rugby, Fawley looked like they may have scored but on the final set piece the ball was caught by a Fawley foot and fell into their No. 9’s hands who duly cleaned up and following an uncharacteristic mistake they re-cycled, their No. 10 ran half the length of the pitch and scored putting the game beyond Fawley’s reach at 26 – 35. Basingstoke scored again making it 26 – 40 in the last seconds.

Overall a spirited display from Fawley, who had chances to win the game and a massive improvement on last season brought about by a good training regime and an influx of new talent.