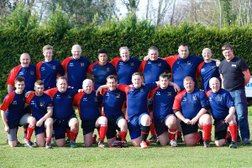 Lots of scores coming our way on a blustery day

Before taking to the road all talk at Fawley was about how bad the weather would be and so setting off all endured the pelting rain storm up the motorway to Alresford but then clear blue skies! A strong wind was blowing directly down the pitch. Alresford turned up with only eleven players but expecting more later, so in good spirit Fawley lent them three for a fourteen aside match. Losing the toss Fawley were playing into the gale for the first half. Kicking off into the gale meant that the ball hung for ages and allowed us to make a good telling tackle, forcing them to pass into space. The ball was pounced upon and from close hand to hand passing allowed for Sam Herman to run wide and then cut back to go through a tackle and score over the line, or so we thought, as the ref saw otherwise and awarded a scrum to defence on the 5m line.

Fawley attacked their scrum but they cleared only to our winger to bring the ball back forcing a ruck then a penalty. With a surprising amount of quick thinking, Chris Conway took the ball drawing three defenders and even managed to pass off the floor for Sam to waltz over from 1m out, this was the start of some good moves from all of the Fawley team. Now Fawley heads were up and starting to play the game plan. After various plays Fawley scored again, then again, then again, then again. Half time could not come quick enough for Alresford as they had seemed to have spent the first half chasing the kick offs. At half time another Alresford player arrived, so kicking with the wind Fawley made the extra man count and scored again. Alresford were not yet finished and after some very good play they scored, then Fawley did, again Fawley, then Alreasford, then Fawley twice, with the final score 62-17. An enjoyable game for everyone, and even the weather was on our side.

Report by Piggy (and slightly edited).