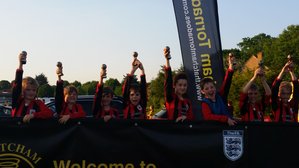 Congratulations to FC Cougars U9s who won the plate competition at the Thatcham Tornadoes tournament.

On the same day that Thatcham Town made headlines as they lifted the FA Vase at Wembley Stadium, FC Cougars U9s were also trophy champions at the Thatcham Tornadoes tournament!

The U9s were plate winners after ending their tournament with a string of wins to eventually beat Harwell and Hendred 1-0 in the plate final. The boys played some great football to win 4-0 in their second round game before winning both their quarter final and semi-final games on the golden goal rule.