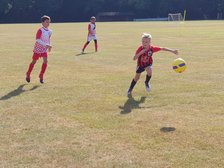 Two Late Goals Not Enough As Cougars Lose At Home

FC Cougars battled well all game with a spirited fight back at the end, but clinical finishing from the opposition meant it was a home loss of 2-4.

Player Of The Match:
Harry Loader

Headlines:
The boys played really well in our first 7 vs 7 home game with season debuts being made by Tobias, Harry C, Oskar L & Ollie T.

It was hot on the pitch, which had an impact on most of the players as we are at the beginning of the season and getting to full match fitness.

1st 1/4: We were definitely a little slow out of the blocks in the first quarter but we did create a number of chances and had more than our fair share of possession. They were definitely more clinical in goal and took their chances well to score 2 goals. They were also a tall, physical team and this seemed to impact us on some of the challenges we made/or didnt make. We were also committing too many players when pressing an opposition player and we kept losing our defensive triangle shape so every opposition attack gained significant ground.

2nd 1/4: We "won" this quarter. Great to see the boys be disciplined, show great spirit and took the game to them. Again, we created a number of chances and were unlucky to not have scored. We were now competing with the physicality across the pitch. We kept a better shape more consistently, so we were not leaving huge gaps in certain parts of the field and we were pressing the player and the angles around the player.

3rd 1/4: Remained an even contest but they took the few chances they created very well. As a team we were nicely into the physical challenge and good to see everyone standing their ground. We also continued to create a number of chances, but we were not consistently keeping our shape, which gave them opportunities. However, the heat, the scoreline & the time played was making it hard work in this quarter.

4th 1/4: The fightback! The players finally got their reward for all the hard work they had put in and we created a number of chances and converted two of them. We were definitely on top for all of this quarter and the opposition heads were dropping! We were keeping our shape really well and playing with fantastic energy.

Overall, we played well, we kept our shape reasonably well and we created a lot of chances. From memory, we missed two open goals, hit the post twice and blasted over several opportunities!

Notable Moments/Mention:
As per last week, I really appreciate that a number of boys played in different positions and some had to stick to positions for the whole match; this positive attitude really helps the team! Where & when we can, we will rotate players & positions.

Thanks to James T for reffing, much appreciated and there were no controversial decisions.

Foul Count: we only conceded one foul and we won several free kicks. I think Alex was at the heart of all of them (David Batty-esque) and his commitment was demonstrated when he smashed into the pole!

Our first goal (Harry L) was a fantastic through ball from Kacper and Harry L controlled it well, carried it towards goal and finished emphatically.

Our second goal (William) was the product of some good team play, great battling from Oskar up front and then William cooly finished it off bottom corner.

Our goalkeepers (Adam & Tobias) did really well with distribution and some really good saves. The opposition were hitting the shots very hard and it was great that they stood up to the challenge and were diving on the ball in dangerous situations. Well done to Tobias for keeping a clean sheet.

Our defenders, midfielders & attackers did really well too; Kacper, Harry C, Ollie T, were pressing well, tackling well & limiting the shooting options. Alex covered a lot of ground to support the defenders and link the attackers and really led from the front with matching the physicality and was on the receiving end of a few nasty kicks; Oliver, Harry L, Angus, Lewis, Will S & Oskar worked very hard to create chances. Oskar was definitely a live wire and linked up really well with Oliver & Will on a number of occasions.
Lewis & Angus beavered away up and down the wings to support the defence and create some chances.
Special mention to Harry L & Oliver I, who played in 3 different positions in the match and gave 100% in all of them.

Overall, the start to the season continues positively, most of the squad have now played once or twice and are starting to look sharper in the matches.

Finally, a big thank you to all the players and parents for today. It is always appreciated.

And a special call out to Kasia for the amazing photos. I will upload all of them from messenger to Pitchero ASAP as I have only saved the one of Oskar so far.

Key Things To Work On For Next Game:
Shooting: conversion of chances.
Pressing: Hold them up, stay angled & 1:1s.
Positioning: reminder of disciplines and transition.

Please note we would appreciate a parent to Ref.