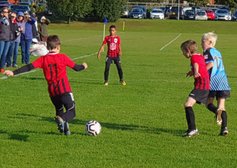 Cougars Dominate But Can Only Draw 3-3 Away From Home

Cougars create a lot of chances & showed great spirit to come back from behind twice, but cannot convert enough in blustery conditions

Player Of The Match:
Angus Shankland

Headlines:
The boys played really well, dominated for most of the game, created a lot of chances, showed fantastic spirit to come back from behind twice but just could not convert enough of the chances to close the game down!

The boys are playing with confidence and for large parts of the game look really good. It was a slower start this week as everyone got used to the conditions, which were difficult. The boys worked hard and dominated the match and on another day it should/could have been another double digit score for us.

On reflection, it shows how far the team has come over the years when our expectations are higher than a draw!
The scoreline suggests a tight match but the number of chances and amount of possession we had suggests otherwise. I think in the first quarter they had one chance and we had in excess of a dozen!

As per last week, we played very well; we are creating so many chances, there are some lovely passes, some fantastic team work and we need to continue to evolve and build on these strengths! In addition, one key area we have to continue to work on is concentration throughout the game as it is often when we have lapses in concentration where we concede as we lose our positions and the principle of how we defend and clear.

I thought it would be good to have a proper ref, but I don't think he actually walked very far, blew a whistle or made many decisions - generally did any reffing. He at least avoided any controversy by doing the minimum.

I am pleased that we managed to involve a lot of players today as we are leaner over the next few weeks. A big thank you and appreciation for both Austin & Hugo who played out of position in the outfield today, and they made important contributions and brought an important physical presence to the side.

When it comes to the goal review - profligate is the word that sums us up!
On the positive side, we created a huge number of chances and for lots of different players. However, today we seemed to be in a hurry to score as we rushed into shooting first time, power over placement or being underpowered; this meant we either missed loads or did not trouble the keeper. I am pleased that Oskar, Oliver, Alex, Lewis, Austin came super close to scoring and after a lot of "sighters", Thomas finally found his range.
I did think the opposition goalkeeper was good. He was not technically proficient, but he was brave, agile and rode his luck . . . for me, he was a clear Man of the Match for the other team as he kept a number of shots out with all & any part of his body!

In summary, our goalkeepers, Tobias & Adam, did really well in windy conditions with a number of decent saves and solid distribution. They both faced a number of tricky corners, some through balls, a slippy ball and they both demonstrated high confidence & competence to cope well under this pressure.
Our defenders did very well today, Kacper, Harry C, Fergus & Hugo, as they stayed switched on for lots of quiet periods of time, they tackled well and snuffed out a number of attacks.
Alex & Austin who alternated in central midfield did very well. The energy levels were high, they pressed, they tackled, they disrupted the opposition and they passed well to set others away and they also took some shots themselves.
Angus, Oskar, Oliver & Lewis worked very hard . It is a demanding position physically as you have to support the defence, transition, and then create & take chances in attack. They all deserved goals and on another day would have had a few each.
Thomas did well in attack; competing for the ball, running at the defence, holding the ball up and looking to pass to team mates . . . however it took him a while to get his shooting power/accuracy fixed much to my frustration!

So, the start to the season continues positively as we remain unbeaten - can we match the Arsenal team of 2003/04 and be the Cougar Invincibles of Autumn 2019?!?

Finally, a big thank you to all the players and parents for today. It is always appreciated.
And as always, a special call out again to Kasia for the amazing photos.

Key Things To Work On For Next Game:
As the season goes on, please keep an eye on the conditions, with hindsight, the boys needed "soft ground" boots today.
So the focus remains:
Shooting: Individual technique & creating shooting opportunities.
Pressing & Defending: Hold them up, stay angled & 1:1s. Make a tackle - block, poke or slide.
Positioning: Watch for the gaps in the pitch. Close the gaps, stop chasing the ball & the player. Think about the space.