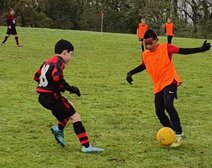 Player Of The Match:
Alex Doherty

Headlines:
This match was expected to be a tough test; we had not played for over 3 weeks, Barton Rovers were unbeaten in the league and had won all of the games they had played (which is a better record than ours). Therefore, winning this game was critical for our title challenge and it would also be a good reflection on how well our team can compete when the bar is raised.

So . . . it was great that we overcame the Barton challenge to secure a superb victory!

It was truly a fantastic performance to win - Barton played some good football, they competed physically for the ball, they were super quick in transition (they got 4 to 5 boys behind the ball at lightening speed) and they certainly provided our toughest opposition yet. But our boys/squad are now consistently playing really well, they continue to progress, they continue to develop better positional awareness, they are competing physically for the ball as well and they can win tough matches.

I was particularly pleased with the reaction to conceding a penalty (& subsequently a goal) in the first few minutes, away from home, with a vocal crowd (& coaches) that they stayed positive/resilient to get back on top.

We are definitely forming a pattern of play in the matches; we dominate for large parts of the game, we create a lot of chances, we show fantastic spirit throughout, we are good at set pieces, we defend well, we typically clear the ball well, we could score more goals . . . but . . . we must transition quicker and more consistently from attack to defence, we must press/defend as a team (starting with the attacker), we must make our challenges consistently count (especially in and around our area) and we must maintain our positional discipline!

A good example of pressing and positioning in this match was how the players started to limit how Barton restarted from goal kicks. Barton constantly wanted to play out from the back to keep possession, which is admirable at U10 level. Once we had figured this out during the first 1/4; we could then get Thomas to press the 1st receiver well, the left/right midfielders to hold ground wide and near the half way line, Alex to hold his position central and on the half way line - this forced mistakes and for them to lose possession in their half or for the ball to go out of play. In the end, they would often resort to kicking long and gambling on possession. It impacted their game plan but we need the boys to figure this out in the game and then think about the best pressing and positioning options, so we don't have to constantly tell them, we will work on this in training.

Notable Moments/Mention:
This game had a bit of everything . . . controversial early penalty decision for Bartons 1st goal; controversial 2 footed/lunge slide through the back of Alex to dump man & ball in the goal for Bartons 2nd; a super hard ball that hurt our players feet; a dog on the pitch to break play; some choice fouls from them; some arguments between coaches and ref; some 'lip' from the opposition players; some wayward clearances hitting Alex H at close range . . . it was a "Box Office" match in our league in the highest stake match of the season!

I also enjoyed the little but tangible shift in belief in the match. For the original kick off and the next one after the 1st 1/4, they were the first on to the pitch for the restart and were waiting for us as we regrouped. After the 2nd 1/4 and for every restart after, it was us that were first back on to the pitch and they took longer and longer to regroup!

Overall, it was a good game technically to watch and the team played so well that we had 9 (out of 9) genuine contenders for Player of the Match. Everyone worked tirelessly and put bodies on the line to win the match.

We scored five goals, and as ever, we should have had a few more . . .
Tom scored a hat trick; the most notable were the first and third. The first was from an incredibly tight angle that we couldn't believe had gone in and the third was a lovely curling free kick from well outside the area that went over the wall and then dipped; it was almost 'top bins' too.
Harry L worked very hard and competed consistently. He scored the two most crucial goals for us as his first goal drew us level and his second took us into a 2 goal cushion which settles the nerves of players and crowd! Both were well created and taken.

In summary, our goalkeeper, Adam, did really well in the conditions and under a constant threat from a number of shots and crosses. He also played the full hour in goal and demonstrated fantastic concentration throughout. Adam is demonstrating good technique (scoop & cup) when saving the ball and in coming out; some real confidence shone through on Sunday.
Our defenders also did very well, Kacper, Hugo, Fergus, to keep good discipline on positions, stay focused, to challenge hard and clear the ball when under pressure. They had to bring their 'A' game against strong and fast attackers who were a constant threat and they did well to constantly break up attacks and close down shots.
Alex had a solid and impressive game in Centre Midfield. He also earned instant 'kudos' from any hardened opposition fans by playing without gloves, base layers etc. on a really cold day as he just kept warm through sheer exertion on the pitch; I think the short sleeves and lack of gloves psyched the opposition out! Alex won Player of the Match for his excellent positioning, being very disruptive in breaking the opposition play, constant energy around the pitch, good distribution and overall contribution to the team effort.
Angus, Oliver & Harry L worked very hard in Midfield. They worked lots of good passes, great link up play, good tracking back and created a number of chances to make us look very strong offensively. Oliver & Harry continue to demonstrate consistently and are fantastic examples of how to play with a constant & consistent physical threat as they don't back away from any challenge.
Thomas continues to perform well up front. He continues to hold the ball up well when outnumbered, he often proves to be a real threat as he attacks the opposition defence with good pace and will always be looking to score goals.

After 6 league games we remain unbeaten and are top of the league. We have 2 games left until the end of the Autumn season, so lets see if we can continue to develop, enjoy them and do the best that we can!

Finally, a big thank you to all the players and parents for Sunday. It is always appreciated.
And as always, a special call out again to Kasia for the amazing photos. (Thomas is particularly loving the montage you got of him being fouled and then scoring the subsequent free kick)

Key Things To Work On For Next Game:
Pressing/Defending: don't jump in, don't turn your back - hold them up and force an error. Make challenges count. Think about technique: block, poke & slide.
Positioning: Watch for the gaps in the pitch. Close the gaps, stop chasing the ball & the player. Think about the space.
Shooting/Finishing: We have to work on accuracy, some calmness around the area as we have to increase our conversion rate of chances.